My First Love Story introduces the solo work of one of New England Conservatory's newest faculty members and one of the most dynamic young artists performing today: composer, performer, and improviser Eden MacAdam-Somer. Recorded live in NEC's Jordan Hall, this album is an incredible blend of contemporary and traditional art, moving fluidly between Appalachian folk song and cutting edge classical performance.  The CD will be released June 23, 2015 on A-Side Records. 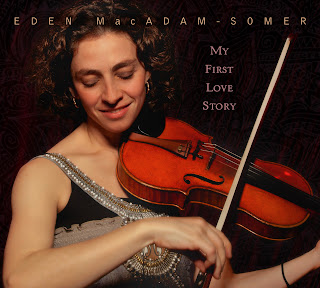 The seeds for this project were planted years ago, when I played my very first notes on the piano. I don't remember that day (I was four years old); in fact, I don't remember a time in my life before music. Music is the language in which I am the most comfortable, and a language that I have been fortunate to share with artists all around the world, in many dialects and in all kinds of settings. For most of my life, I have struggled in defining myself as an artist: violinist, fiddler, singer, dancer, improviser, composer, educator, performer, musicologistŠ but I have come to realize that it is the sum of all of these parts that makes me who I am. This project is a portrait of the artist that I am today and the story of my first love, kindled all of those years ago in my four-year old heart.

The album centers around MacAdam-Somer's Rumi Songs, an open-ended cycle for voice and violin that is partially composed and partially improvised. The three movements carry the listener from sweet Bach-like tones through serial systems, folk references, and free improvisation, while vocals soar in translations of ecstatic love poems by the famed Sufi poet Mevleva Rumi. This work was inspired by Ralph Vaughan Williams' Along the Field, also featured on the recording arranged for solo performer with improvised fiddle interludes and English Country Dance tunes. "Vaughan Williams is so skillful in blending folk songs with classical composition, and I always wondered what it would be like to perform this piece with a folk singerŠit is not at all uncommon for folk musicians to sing and play at the same time and eventually I thought, 'maybe I can do both parts.' I love being able to tell the whole story myself, because I can follow my imagination wherever it takes me at any timeŠ it isn't about "blending" genres or about the technical challenges in playing and singing at the same time, but simply telling the story the way I hear it, which might be a little different in each performance."

MacAdam-Somer carries the listener to many imagined worlds in this recording. "Jump for Joy" is a jubilant blending of Duke Ellington's composition with African-American spirituals and folk dance tradition. The violinist takes on the role of the big band, drumming her tapping feet which burst into celebratory percussive dance. From here, she moves into the realm of film noir with "Lullaby," a dark, early-music-inspired tribute to jazz pianist Ran Blake: "This scene is from Claude Chabrol's Le Boucher, in which an Algerian war veteran (and the local butcher) is suspected of being a brutal serial killer in a small French village. In this scene, school children are practicing a courtly Baroque dance in period costume, creating a sense of eerie serenity just before the traumatic climax of the film."

Also featured on the album are more traditionally rooted pieces. The CD opens with an original song, "Fourteen Miles," with straight up Appalachian fiddling darting suddenly through angular pizzicato passages under sweet vocals. "Barbara Allen" blends the familiar folk ballad with West African gonje tunes, traditionally used to relay village histories as a means of preserving aural history. The recording ends with "Say Darlin' Say," a sweet lullaby in which the voice and viola intertwine and become one, speaking to the way MacAdam-Somer weaves all of her musical selves into one exceptional and individual voice, each and every time. 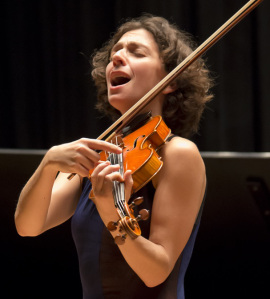 NEC's Contemporary Improvisation Department is all about developing one's unique voice, invoking a methodology that liberates the idea of improvisation from any specific genre. CI faculty provide students with grounding in aural skills, vocal and instrumental technique, a wide range of improvisational traditions - in short, everything a student might need to become a leading artist of today. Department Chair Hankus Netsky notes that "Eden is what Gunther Schuller would call a 'compleat musician.' She's a violin virtuoso who knows many fiddling styles, a wonderful composer and a great singer."

Indeed, MacAdam-Somer's music transcends genre. She has been a featured soloist with symphony and chamber orchestras, jazz and swing bands, and Eastern European and American folk ensembles. As an educator and composer/improviser, MacAdam-Somer has been a guest artist at such institutions as the Afghanistan National Institute of Music (where she is a regular visiting faculty member) and the Dundalk Institute of Technology, as well as a featured performer at the Eastbourne and Beijing International Music Festivals.

While growing up in Houston, Texas, MacAdam-Somer studied classical music formally, spending her free time at the local folk music sessions and working as an arranger and studio musician. She attended Houston's High School for Performing and Visual Arts, winning the Music Teacher's National Association State Division and the Lennox Young Artists Competitions. Later, she earned her BM and MM in classical performance from the Moores School of Music at the University of Houston as a student of Fredell Lack, and the Shepherd School of Music at Rice University as a student of Kenneth Goldsmith. 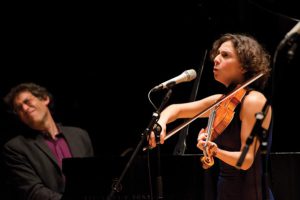 In 2004, MacAdam-Somer moved to Boston and began touring with guitarist and banjo player Larry Unger as the core members of the ensemble NotoriousFolk. Together, they have performed across the continental United States, as well as Alaska, Hawaii, India, Iceland, the UK, and Afghanistan, teaching and playing for festivals and dances of all kinds. Their music has been featured in many of Ken Burns' documentaries, including Our National Parks, The Dustbowl, Prohibition, and The Roosevelts.

With her diverse interests and capabilities as a performer and educator, MacAdam-Somer finds NEC's Department of Contemporary Improvisation the perfect home base. "When I arrived at NEC and attended my first CI concert, I realized that I had found the artists I'd been looking for my whole life. The CI Department is much more than a degree program - it is a vibrant community of creative musicians, each coming in with a distinct voice of their own, eager to push themselves to new artistic levels and completely open to and enthusiastic about the music of their peers. It is one of the most mutually supportive and exciting musical communities that I have ever been a part of."

Outside of the classroom, MacAdam-Somer maintains an active international performance and recording career as a soloist and with such bands as Notorious Folk, the Sail Away Ladies, and the Klezmer Conservatory Band.