From Salento to the World: The Global Soul of Southern Italian Trance on Ludovico Einaudi’s Taranta Project
(Ponderosa Music; US release: May 4, 2015)

Salento is the heel in the boot of Italy, part of the region known as Puglia, kept dry and dusty by the hot wind that crosses the Mediterranean from the Sahara and North Africa. Long before the Roman Empire existed, Salento was a Greek province, and the traditions and culture run deep here. None more so than the taranta, a musical form connected to the tarantula spiders often found in the fields. Their deadly bite could reputedly only be cured by the trance-like dance. All of that forms the heart of Taranta Project, the new album by acclaimed composer, conductor, and pianist Ludovico Einaudi (Ponderosa Music; US release: May 4, 2015). 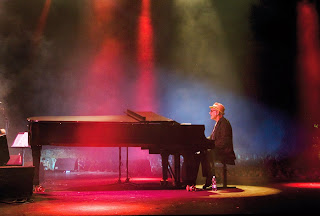 His aim was to bring the taranta to a more universal level by connecting it with music from West Africa and Turkey. It explores tradition while keeping it firmly of the core of Taranta Project; the unmistakable hypnotic rhythm of the taranta provides the foundation of everything. “In 2010 and ’11 I was invited to direct a concert that’s happened for the last 15 years in Salento,” Einaudi explains. “It drew 100,000 people and we toured it the next year, recording what we did. After that we did more in the studio, and the result is that Taranta Project has a studio sound, but with all the energy of a live performance.”

“I started by working with a regional orchestra,” Einaudi recalls. “There was accordion, percussion, and mandola. Then I brought in Ballaké Sissoko with his kora. And on the other side I had Justin Adams on electric guitar and Juldeh Camara on one-string ritti fiddle and vocals.” That was just the beginning. Mercan Dede added electronics, Turkish percussion, and ney flute, while the Roma Film Orchestra brought sweeping grandeur to the piece.

In this music, the sands are constantly shifting: On “Nazzu Nazzu,” desert blues dances with taranta in a fiery mix, powered by a raw guitar riff. The breathtaking “Preludio Nar-I Sehar” builds across 10 minutes, from reflective piano and violin to Arab percussion before resolving into a glorious cascade of notes in a kora improvisation. And everything closes with the quiet gentleness of voice and piano on “Nuvole Bianche.”

From the ancient, otherworldly polyphonic harmonies to the rich orchestral harmonies that climax “Santu Paulu Finale,” it’s a disc of remarkable adventure and breadth, weaving a web between countries and histories while keeping the sensibility of Salento intact. The music of Taranta Project captures not only the head but also the heart.

Einaudi is no stranger to mixing classical and roots music, to finding profound emotion in intellectually complex composition, or to collaborating with people from around the globe. He was a pupil of avant-garde composer Luciano Berio and has written works for modern classical chamber groups and 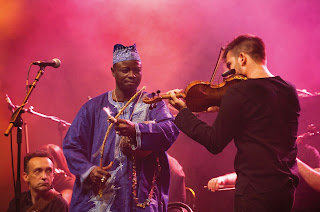 orchestras as well as recording solo on piano. Knighted in Italy for his music, this is the most ambitious labor he’s undertaken.

“After I put the musicians together,” he says, “the big work after the rehearsals and the concerts was to select just an hour of it for the album. I wanted to stay close to the reality of the music without changing too much, to put myself into the music of taranta.”

Certainly those who worked with him feel he succeeded in his aim. “He took the tradition and he gave it a fresh seasoning from the future,” notes Mercan Dede. “He created a perfect balance.”

“It’s less foursquare than most European folk music,” observes Justin Adams. “Repetition is such a big part of it and it goes deep into your soul, both when you’re playing and when you’re listening to it. Ludovico makes it go from the epic to the intimate.”

Past and present come together with beauty and primal force, elegance and passion. And the Taranta Project has changed at least one life – that of Ludovico Einaudi. “Before this experience I thought I was a boy from northern Italy,” he admits with a smile. “After it, part of my heart is in Salento.”