Show One Productions
proudly presents the triumphant return of the Vakhtangov State Academic Theatre of Russia with a new production
SMILE AT US, OH LORD
based on the works of Grigory Kanovich
Performed in Russian with English Surtitles
Two Performances Only - June 16 & 17, 2015

Toronto, ON  - After its sold-out 2014 run of Eugene Onegin last June in Toronto, the esteemed Vakhtangov Academic Theatre of Russia returns with a new theatrical spectacle for the international stage: Smile at Us, Oh Lord: an inspiring universal parable about the basic good in every human being. Directed by the company's noted Artistic Director Rimas Tuminas, Smile at Us, Oh Lord runs Tuesday 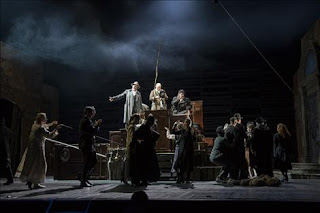 June 16 and Wednesday June 17 for two shows only at the historic Elgin Theatre, presented by Show One Productions.

Of Rimas Tuminas' Eugene Onegin, the critics raved: "Anyone who saw the Vakhtangov Theatre knows they are a first-rate troupe," exclaimed The Guardian in London while Paris' Le Monde proclaimed them "brilliant." The Vakhtangov production of Smile at Us, Oh Lord makes its debut outside of Russia with this North American tour and promises to mesmerize audiences as well.

In what is becoming a regular tour for the Vakhtangov, prior to its June 16-17 engagement in Toronto (its only Canadian date), Smile at Us, Oh Lord performs June 5-7 at New York City Center and June 12-13 at the Cutler Majestic Theatre in Boston. It is presented in Russian with English surtitles and performed by an all-star cast of renowned actors.

With a plot full of tragi-comedic moments, accented by soulful music, Smile at Us, Oh Lord is the story of an "every man," unrelentingly opposed to evil and wrongdoing, even as the world around him crumbles. His journey opens his eyes - and the audience's hearts - to the fate of Jews around the world during the first half of the 20th century.

This poignant and exuberant work highlights the new kind of poetic physical theatre that the Vakhtangov Theatre is spearheading, and with a cast of 40, it tells a larger-than-life story of the common man, linked to a compassionate great love of mankind. 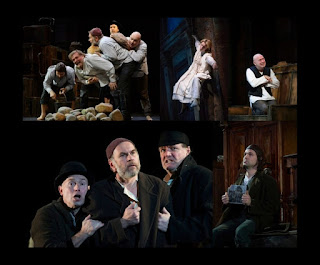 Smile at Us, Oh Lord is based on the novels of Grigory Yaakov Kanovich, one of the most prolific modern Russian-language writers today. While born in Lithuania of Jewish heritage, he spent his childhood in exile in Kazakhstan. His family returned to Vilnius in 1945, he published his first book of poetry in 1948, graduated from university in 1953 and moved to Israel in 1993. Kanovich is the author of an epic saga dealing with the struggles of Eastern European Jewry from the 19th century to the present day. His books, plays and poetry have been translated into 14 languages with more than 1.5 million copies, and counting, printed.

Based in the heart of Moscow, the Vakhtangov State Academic Theatre of Russia (http://www.vakhtangov.ru/en) was founded in 1921 by legendary Russian theatrical director and Stanislavsky scholar, Evgeny Vakhtangov and continues to be one of the country's leading theatres. Lithuanian-born Rimas Tuminas is the first foreign director to head the Vakhtangov Theatre, where he has served as artistic director since he was invited to hold the position in 2007.

Tuminas first developed Smile at Us, Oh Lord at the Maly Theater of Vilnius in 1994, which he founded in 1990, and toured extensively across Europe. This current production premiered in Moscow in March 2014, co-created with composer Faustas Latenas and set designer Adomas Yacovskis.

Show One Productions presents
The Vakhtangov State Academic Theatre of Russia
SMILE AT US, OH LORD
based on the works of Grigory Kanovich
Performed in Russian with English Surtitles
Elgin Theatre, 189 Yonge Street, Toronto
Tuesday, June 16 and Wednesday, June 17, 2015  @ 8pm
Ticket prices range from $55-$155
Ticket prices do not include service charges or delivery fees
and can by purchased by calling 1.855.622.ARTS FREE (2787) or online at ShowOneProductions.ca, or Ticketmaster.ca