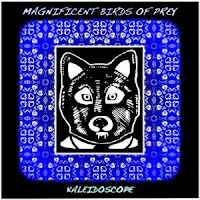 Formed by friends from Philadelphia, New Jersey & Pittsburgh; the sound of the Northeast exports, Magnificent Birds of Prey reflects the loud, dirty and addictive nature of their respective suburbs, set to the heartbeat of the City of Brotherly Love.

The techy and sometimes psychedelic four-piece has drawn comparisons to Superchunk, Pearl Jam, Guided By Voices and Manchester Orchestra for their wily mix of indie/alternative rock and literary prowess. They name check bodies of work as varied as Star Trek, Kurt Vonnegut and Pulp Fiction and hope to make good on their name by bringing in “magnificent” sonic landscapes with unbridled attack, coining their sound ‘karate rock’- a music that moves you. “We question ourselves in both silly and serious ways”, says lead vocalist Lyle, “and that lighthearted nature finds its way into our music”.

Magnificent Birds of Prey will be releasing their new album Kaleidoscope August 18th and heading out on a regional tour of the Northeast this Summer/Fall.