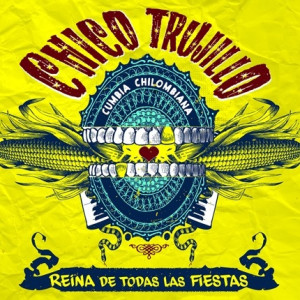 If there is such a thing as Cumbia Kings, the crown should probably go to Chilean group Chico Trujillo. Fifteen years ago, in the small town of Villa Aleman, a few miles from Valparaiso, Chico Trujillo started as informal gatherings where singer Aldo “Macha” Asenjo and members of his punk/ska group La Floripondio would play old Chilean and Colombian cumbia hits for fun. The gatherings soon turned into a touring band that would spend most summers in Berlin where they honed their tropical chops (not unlike a famed Liverpool band honing their skills in Hamburg clubs) and eventually take them to Vive Latino; the Hollywood Bowl and Lollapalooza where Jon Pareles, of the NY Times, called the band “a world-class party band” adding that Mr. Asenjo sings lyrics as chattery and percussive as some hip-hop, taking on the ups and downs of love and life.”

A few world tours and six albums later, Chico Trujillo has come to symbolize a uniquely Chilean cocktail. Chico Trujillo is rooted in the cumbias of the pre-Pinochet days and seems to incorporate every aspect of Chile’s popular culture. Chico Trujillo has meshed bits and pieces of Chile’s fragmented past with the global influence of alternative culture and merged it all under the pan-Latin banner of Cumbia.

Their new album, Reina de Todas Las Fiestas (The Queen of All Parties), was recorded in Colombia, Mexico, Argentina and Chile and aims at creating a pan Latin American sound that is still based on good old cumbia, but also incorporates aspects of the continent’s varied musical culture. Los Chicos are still a party band, but it’s a moving party with an Andean edge, some Argentinean slang, and Mexican fans.

The essential new reference on the album is that of Northern Chile’s carnival music. Chico Trujillo recorded with the legendary Banda Wiracocha – a thirty-piece brass band from Iquique. Wiricocha usually plays traditional carnival parties filled with songs, dances and rituals based on pre-Hispanic traditions that have been kept alive by the Andean Aymara-speaking population. Chico Trujillo did a string of concerts with the Banda that proved to be raucous celebrations of Chile’s past and present culture – with forty musicians on stage and a wall of brass as loud and powerful as any other kind of metal band. 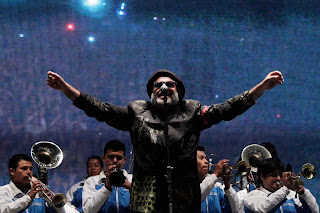 Other collaborations include a duet with Argentinean pop star Kevin Johansen – on the poignant Los nervios que te di – as well as a version of Calixto Ochoa’s Colombian Cumbia classic, Playas Marinas, with Henrique Alvarez, singer of Chilean band Los Tres – which may be the most influential rock bands ever to come out of Chile. Reina de Todas las Fiestas also features a track with Rebel Diaz, a political Hip Hop group from the Bronx fronted by two Chilean brothers.

Chico Trujillo’s Pan Latin-American new approach on Reina de Todas Las Fiestas pushes the band at the forefront of a recent movement that is redefining South American identity, with a newfound regional pride and unity. It also gives the band access to a more universal understanding of its music, which is not just confined to its domestic Chilean roots, or the global party-loving cumbia throngs.

It is probably no coincidence that, as he was working on Reina de Todas las Fiestas, singer Macha was also busy with Bloque  Depresivo – a side project which mines the more sentimental streak of the South American canon and pays tribute to the Latin equivalent of torch songs: Peruvian waltzes, Argentinean ballads, Ecuadorian Pasillos and the likes. Likewise, Chico Trujillo, while always keeping the beat going, never strays far from a certain sentimental approach that permeates even the happiest cumbias, and it is probably one of the secrets of their success: a level of sincerity and emotion that enables rockeros and cumbieros from every generation to relate to the music at a deep level – while dancing.

Reina de Todas las Fiesta, in that regard, is Chico Trujillo’s crowning achievement with an uncanny ability to reference Violeta Parra, Andean music, Mexican ranchera, Argentinean rock – all that without ever missing a cumbia beat.