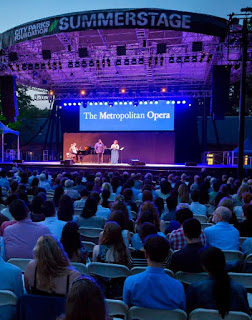 Janai Brugger is a Soprano hailing from Chicago, Illinois. She made her Metropolitan Opera debut in 2012 as Liù in Turandot and also starred as Helena in The Enchanted Island. Other career highlights include roles as Pamina in Die Zauberflöte at Covent Garden and the Los Angeles Opera, Liù at Hawaii Opera Theatre, and Micaëla with Opera Colorado. She has also appeared with the Cincinnati Symphony Orchestra, Los Angeles Philharmonic, Philadelphia Orchestra, and Chicago Symphony Orchestra. She is a 2012 winner of the Metropolitan Opera National Council Auditions and Plácido Domingo's Operalia competition. Upcoming, she'll perform as Micaëla in Carmen with the Washington National Opera and in Kansas City and Musetta in La Bohème with the Los Angeles Opera.

Nathan Gunn is a Baritone hailing from South Bend, Indiana. He has sung in more than 100 Metropolitan Opera performances consisting of 14 roles, including the title role of Billy Budd, Danilo in The Merry Widow, Papageno in The Magic Flute, Raimbaud in Le Comte Ory, Clyde Griffiths in the world premiere of Picker's An American Tragedy, Guglielmo in Così fan tutte, and in the ensemble of Corigliano's The Ghosts of Versailles (debut, 1995). Additional career highlights include his recent role as Zurga in Les Pêcheurs de Perles at the Theater an der Wien and the title role of Sondheim's Sweeney Todd at the Houston Grand Opera. He created a number of roles in world premieres, including James Dalton in Iain Bell's A Harlot's Progress at the Theater an der Wien, Yeshua in Mark Adamo's The Gospel of Mary Magdalene at the San Francisco Opera, Alec Harvey in Previn's Brief Encounter at the Houston Grand Opera, Father Delura in Peter Eötvös's Love and Other Demons at Glyndebourne, and Paul in Daron Hagen's Amelia at the Seattle Opera. He is a graduate of the Met's Lindemann Young Artist Development Program; a recipient of the Met's Beverly Sills Artist Award, established by Agnes Varis and Karl Leichtman; and was recently named Director of the American Repertoire Council at the Opera Company of Philadelphia. Upcoming, he will sing Inman in the world premiere of Jennifer Higdon's Cold Mountain with the Santa Fe Opera and later with Opera Philadelphia, and Sid Taylor in the world premiere of Jake Heggie's Great Scott with the Dallas Opera, followed by performances at the San Diego Opera.

Isabel Leonard is a New York based Mezzo-Soprano. She made her Metropolitan Opera debut in 2007 as Stéphano in Roméo et Juliette. Other Met appearances include Dorabella in Così fan tutte, Miranda in The Tempest, Rosina, Blanche in Dialogues des Carmélites, and Zerlina in Don Giovanni. Her career highlights include a recent performance as Rosina at the Vienna State Opera and Angelina in La Cenerentola at Munich's Bavarian State Opera and for her debut with the Washington National Opera. She has also sung Rosina at the San Francisco Opera, Lyric Opera of Chicago, and Dallas Opera, Sesto in La Clemenza di Tito with the Canadian Opera Company, Ruggiero in Handel's Alcina in Bordeaux, Cherubino at the Glyndebourne Festival, Sesto in Giulio Cesare and Cherubino at the Paris Opera, Cherubino with the Bavarian State Opera, and Dorabella at the Salzburg Festival. She was a recipient of the Met's Beverly Sills Artist Award, established by Agnes Varis and Karl Leichtman. Upcoming, she will sing Ada in the world premiere of Jennifer Higdon's Cold Mountain with Santa Fe Opera, followed by performances at Opera Philadelphia, Rosina in Il Barbiere di Siviglia and Cherubino in Le Nozze di Figaro at the Met, Angelina in La Cenerentola with Lyric Opera of Chicago, and Arden Scott in Jake Heggie's Great Scott with San Diego Opera.

Dan Saunders is a pianist hailing from Perry, New York. His career highlights include performances in recital with singers including Jessye Norman, Kiri Te Kanawa, Kathleen Battle, Marilyn Horne, Tatiana Troyanos, Samuel Ramey, and Thomas Allen; and with instrumentalists including violinists Eugen Fodor and Tomoko Kato. He has also performed at the White House, on national television, and at Carnegie Hall, Washington's Kennedy Center, Paris's Bastille Opera, San Francisco Opera, and London's Wigmore Hall, as well as at the Santa Fe, Salzburg, Tanglewood, and Ravinia festivals. He joined the Met's music staff in 1985 as an Assistant Conductor and has been heard as harpsichordist on the Live from Lincoln Center television series and as a pianist on the Met's international radio broadcasts.