TORONTO - Over the past two decades, Oliver & Bonacini’s Canoe has become a landmark Toronto restaurant and a growing part of the international culinary conversation, as it continues to define Canadian cuisine. To mark its 20th anniversary, Canoe invites the public to celebrate this special milestone with Canoe Twenty, a tasting menu that showcases present-day Canoe – a moment in time after its twenty-year evolution.

This limited-time experience will be presented by Canoe’s next generation: executive chef John Horne and chef de cuisine Coulson Armstrong, joined by chef Anthony Walsh, who has led Canoe’s culinary brigade since the restaurant opened in 1995. The multi-course commemorative menu will be offered from Sept. 21 (the exact date in 1995 when Canoe opened its doors) until Nov. 20, 2015, and is available with wine pairings ($150) or without ($100). 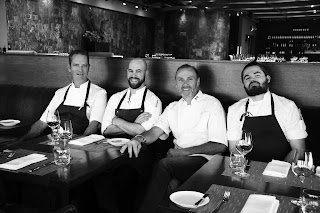 About Canoe
Since opening in September 1995, Canoe has been recognized among Canada’s top restaurants. Its unique location high atop the TD Bank Tower affords a breathtaking view of downtown Toronto. Originally designed by award-winning design firm Yabu Pushelberg, the restaurant’s space is clean and simple - a brilliant reflection of Canada’s rich, raw environment. That same brilliance is captured through the flavours and textures of Canoe’s inspired Canadian menu, crafted by executive chef John Horne and chef de cuisine Coulson Armstrong. The menu showcases the freshest and finest Canadian fish, game and produce, as well as an outstanding selection of Canadian vintages. Canoe has received numerous awards and distinctions, including a #1 ranking by the Zagat Survey and Toronto Life magazine, as well as a four-star rating by The Globe and Mail (2015). From left: Anthony Walsh, John Horne, Michael Bonacini, and Coulson Armstrong. Image by Allison Woo.