For Pan Am: Textile Museum of Canada launches Watercolour July 14 to 17 2015

TORONTO - The Textile Museum of Canada is pleased to announce Watercolour, a cultural project presented in partnership with the Toronto 2015 Pan Am/Parapan American Games. Celebrating the culture and artistry of Pan American nations, Watercolour will comprise 41 sails featuring artwork by one artist from each participating country. Encompassing work from internationally renowned to emerging and mid-career artists, the designs will animate sailboats on Lake Ontario with their rich visual diversity during ceremonies at the Toronto 2015 Games. 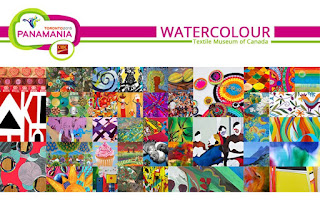 Celebrating its 40th anniversary in 2015, the Textile Museum of Canada’s award-winning work with contemporary artists and global cultural traditions informed the project. “Sails are among the most ancient and most iconic expressions of textiles in everyday life,” says Textile Museum of Canada Executive Director Shauna McCabe. “Transcending space and time, sails make perfect sense as a way to communicate what we have in common – the universal experiences and imaginations that inspire everyone – artists to athletes – to achieve their dreams.” Together the designs on the sails speak to shared environments and ways of life as well as cultural and artistic relationships between Pan Am countries.

Watercolour showcases some of the leading artists of the Pan American nations. Representing Canada, Sobey Art Award winner (2014) Nadia Myre has collaborated with Powerhouse Prize winner (2012) Karen Elaine Spencer to design “AKI,” an elegant combination of Anishnabe-mowin, Spanish, French and English words to ask: “Who will win in this land here?” Paula Barragan of Ecuador has adapted a traditional Zuleta embroidery pattern in celebration of indigenous heritage. Representing Trinidad, Christopher Cozier is recognized internationally for his politically and culturally incisive artwork, along with his role in developing contemporary art discourse and practice throughout the Caribbean. Chris Johanson of the United States draws on urban and suburban experiences, graffiti and the aesthetics of street art in his work, clearly captured on the American sail. Ami Zanders’s entry reflects her work in the Bermuda National Gallery’s 2014 Biennial – bright and colourful yarn, beads and threads call forth the light and vibrancy of her country. Argentinian duo Chiachio & Giannone craft embroidered collages that play with self-portraiture and images of global identity. 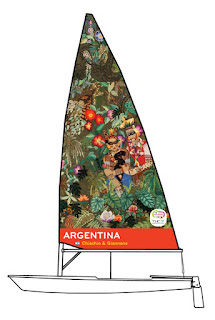 Scheduled sailings will take place daily from July 14 – 17, launching at 5:30 pm from Harbourfront Centre Sailing & Powerboating (HCSP) docks (275 Queens Quay W at Rees Street). The boats will hold off in fleet position from 6 – 6:10 pm at Ontario’s Celebration Zone at Harbourfront Centre (231 Queens Quay W.) before continuing east towards Corus Quay (Queens Quay and Jarvis Street) where they will loop and return to the HCSP for 6:30. Recommended viewing is from the foot of the Power Plant Art Gallery (231 Queens Quay W. and Simcoe Street) and Sugar Beach (25 Dockside Drive).

Each day will feature a different selection of the 41 representative participant countries. The Textile Museum of Canada presents Watercolour in partnership with the Toronto 2015 Parapan/Parapan Am Games and the Toronto Arts Council. For more information visit www.textilemuseum.ca/exhibitions/watercolour.aspx or call the Museum at 416-599-5321.