Jazz CD Release: Composer and Trombone Virtuoso Nick Finzer -The Chase To be released on Origin Records on July 21, 2015

Jazz CD Release:
Composer and Trombone Virtuoso Nick Finzer Showcases
Imaginative Original Tunes And His Whip Smart Sextet on The Chase
To be released on Origin Records on July 21, 2015 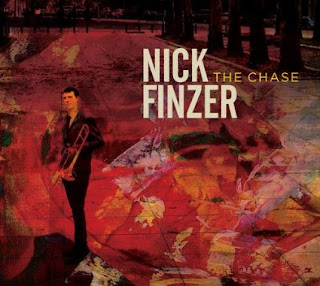 The trombone, after too long a period of relative neglect, is experiencing a vital surge of interest on the contemporary jazz landscape and Nick Finzer is at the helm of this revival. On The Chase, his second album as a leader, this abundantly gifted instrumentalist exhibits all the skills that have brought him to the attention of the fellow musicians and discerning listeners who recognize an important and inventive new voice on the horn. Yet, as a complete jazz figure, Finzer makes use of The Chase to also demonstrate his considerable talents as an accomplished composer, arranger and bandleader. Guiding a crack sextet that includes Glenn Zaleski on piano, Lucas Pino on reeds, Alex Wintz on guitar, Dave Baron on bass and Jimmy MacBride on drums (all but Zaleski can also be heard on Finzer's 2013 debut album Exposition), Finzer reinvigorates both his venerable tailgate instrument and the ever evolving small group tradition of modern jazz.  The Chase will be released on Origin Records on July 21, 2015.

Finzer's ten original compositions exhibit his gifts for memorable melody and formal ingenuity, while his arrangements maintain a thoughtful balance between ensemble cohesion and thrilling displays of individual virtuosity. As for instrumental prowess, look no further than the title track, which explodes with penetrating improvisations at breakneck tempo from Pino (on his customary tenor saxophone), Wintz, Zaleski and the leader. Other performances, no less riveting, offer satisfactions in mellower form. "Life Happens," "Spheres Of Influence," "All Hype" "Acceptance," "Why Aren't You Excited" and "Just Passed the Horizon" make use of lyrically spellbinding playing from all to conjure up captivating musical moods. The affecting ballad "While You're Gone" displays Finzer's affection for the Ellingtonesque use of the mute to achieve vocally-inflected tones while the mid-tempo "Steadfast" and "Search For a Sunset" demonstrate Finzer's command of his tightly muted horn as well as Pino's effective employment of the bass clarinet. 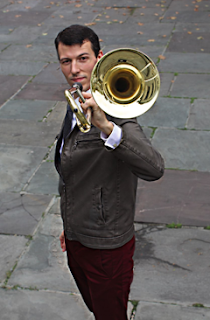 "I wanted this album to focus on the personalities of the band," Finzer says. "I write to challenge myself, but I made sure that on this recording there would be plenty of room to highlight these incredible players. We've all known each other for so long and/or crossed paths so often in our careers that a special relationship has developed between us that I think you can clearly hear. I may compose the music but I want everyone involved to bring their own ideas and feelings to it. There's so much more to this music than what's just on the page. Being open to the contributions of others is how it comes alive."

A familiar face on the contemporary jazz scene due to his presence in such celebrated bands as Ryan Truesdell's Gil Evans Project, Finzer did his undergraduate studies at The Eastman School of Music. Mentored by the acclaimed trombonist Wycliffe Gordon, Finzer relocated to New York City and completed his formal musical education, graduating with a Masters Degree from The Julliard School. Among the jazz luminaries he has worked with are Wynton Marsalis and the Lincoln Center Jazz Orchestra, Steve Turre, Frank Wess, Lew Tabackin, Frank Kimbrough, Lewis Nash and Terell Stafford. Co-founder and Artistic Director of the Institute of Creative Music Music (www.ifcmusic.org), Finzer regularly conducts national workshops, residencies and master classes. He is the author of "Get Ahead!: A Practical Guide For the Developing Jazz Trombonist." In addition to his extensive freelance work, Finzer also leads various ensembles-including his sextet-in the New York City area.