Photography with a Purpose: HIPA Presents 'A Dream of Humanity' in Paris July 26 to October 15 2015

HIPA PRESENTS ‘A DREAM OF HUMANITY’ EXHIBITION IN PARIS
July 26 to October 15, 2015
on the Left Bank of the River Seine 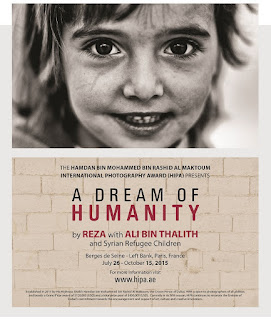 PARIS - If you are in Paris this summer and into the fall, you will want to take a stroll on la Rive gauche to view this captivating exhibition. The Hamdan bin Mohammed bin Rashid Al Maktoum International Photography Award (HIPA) launched an exhibition titled ‘A Dream of Humanity’ on the banks of the River Seine in the French capital featuring photography by world-renowned photojournalist Reza Deghati as well as photographs from the ‘Faces’ initiative by HIPA which involved photography of and by Syrian children in a refugee camp in Northern Jordan. The exhibition is set to run from the 26th of July until the 15th of October 2015, along the banks of the River Seine.

Commenting on the launch of the exhibition, the Secretary General of HIPA, His Excellency Ali bin Thalith said “HIPA undertook the sponsorship of the ‘A Dream of Humanity’ exhibition to be part of our wide-ranging humanitarian responsibility and to document the living conditions of global refugees and their everyday struggles. We also feel that it is our moral obligation to raise awareness of the current plight of Syrian refugees and their bravery in telling us their stories by staring into the lens of a camera”. 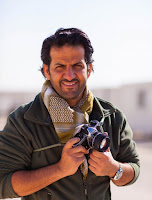 Bin Thalith continued that “HIPA is a photography competition which is not restricted by the artform but rather empowered through it to change the lives of as many people as possible. This can be done by repeatedly documenting the hardships faced by global refugees, and what better photographer to do this with than Mr. Reza Deghati, who is a global ambassador for photography and the humanitarian aspect of it. Reza’s photography has changed the lives of many people around the world and we hope to impact more people in the coming period through our joint project, ‘A Dream of Humanity’.