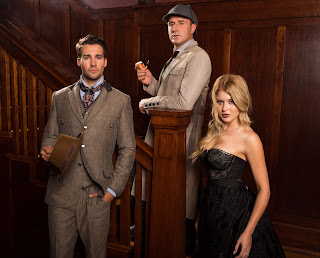 A new theatrical adventure and fresh take on the classic Sir Arthur Conan Doyle tales, to be staged at Toronto’s Ed Mirvish Theatre from Oct. 27 to Nov. 8

Toronto ON: Producers at Starvox Entertainment and June Entertainment announced today James Maslow and Renne Olstead will join David Arquette on stage in Sherlock Holmes. Maslow, best known for playing the role of James Diamond in Nickelodeon's Big Time Rush, will star as the legendary Dr. John Watson and Olstead, who played Madison Cooperstein in The Secret Life of the American Teenager, will take on the role of the well-to-do-American, Lady Irene St. John.

Both actors will make their stage debut in this new, and original adaptation. Inspired by Sir Arthur Conan Doyle’s classic tales, penned by the late playwright Greg Kramer and directed by Andrew Shaver, Sherlock Holmes is scheduled to play Toronto’s Ed Mirvish Theatre (244 Victoria Street) from Oct. 27 to Nov. 8.

The eleven member acting company includes much of the original cast from the critically acclaimed Montreal Segal Centre production that premiered in May 2013, also directed by Shaver. Shaver will restage the show for a North American tour, launching a six-performance, “Tour Preview” engagement on Oct. 15 in Los Angeles, followed by additional runs in Toronto, Washington, D.C. and Chicago, with subsequent cities planned into 2016 to be announced shortly.

• Tickets on sale now at at Mirvish.com

Toronto, ON –Starvox Entertainment announced today it has signed David Arquette (Scream, Friends) to play the title role in an original adaptation of Sherlock Holmes inspired by Sir Arthur Conan Doyle’s classic tales by the late Canadian playwright, Greg Kramer. Sherlock Holmes premiered in Montreal in 2013 in a sold-out, critically acclaimed production at The Segal Centre directed by Andrew Shaver, who will remount the show for a North American tour, playing Toronto’s Ed Mirvish Theatre from October 27 to November 8, 2015.

Joining Arquette in the nine person cast as the detective’s faithful associate and biographer Dr. John Watson, is rising star Michael Trevino, best known for his six seasons as Tyler Lockwood on television’s The Vampire Diaries and as the same character in the spin-off series The Originals.

"I am beyond excited to play one of the most loved characters in all literature, stage and screen,” says Arquette. “Some may think I'm an odd choice. I am. I'm odd but thankfully so is he."

The stage production of Sherlock Holmes was the recipient of five prestigious Montreal English Theatre Awards, including Outstanding Production and Outstanding Director. The Segal Centre commissioned multi-talented, British-born Montreal-based writer, director and actor Kramer to pen this fresh new take on Conan Doyle’s stories of the legendary detective. The playwright was also supposed to play Scotland Yard detective Lestrade in the original Montreal production, but tragically, Kramer passed away on the eve of rehearsals. 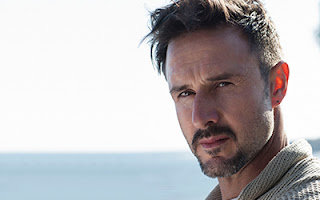 Andrew Shaver, one of Canada’s most exciting young directors, known for his work with the innovative SideMart Theatrical Grocery (Trad, Haunted Hillbilly, Gordon) and assignments with Des McAnuff for the Stratford Festival, brings his ironic and kinesthetic vision to the production.

Produced by Starvox Entertainment in association with June Entertainment, Sherlock Holmes premiers in Toronto after a six-performance preview mounting in Los Angeles before kicking off a multi-city U.S. tour including stops in Washington, DC and Chicago, with subsequent cities planned into 2016.

“This production’s frequent laugh-out-loud, melodramatic mysteries and sometimes nightmarish moments proved irresistible, and I knew within ten minutes of the curtain going up that I wanted to produce the show for an extended commercial life after Montreal,” said Starvox producer Corey Ross. "The Steampunk costumes and brilliant set design -- featuring projections on metal scrims -- give the production a distinct modern edge, yet all the while, it remains quintessentially Sherlock Holmes. It’s both timeless and contemporary and audiences will enjoy the way it slyly hints at current events and today’s political culture."

ABOUT THE SHOW
Thrilling, humorous, full of head-scratching crimes and dazzling deduction in the face of cunning evil, Sherlock Holmes takes theatergoers on a heart-stopping adventure through the opium dens, the muddy docklands and the gritty backstreets of London during the turn of the century, a time of great social and technological change.

The opium wars have ended. The Ripper has wreaked his havoc. Electricity is on the rise and Scotland Yard is in its infancy. Lord Neville St. John gives a moving speech in the House of Lords to ban opium and a vote on the matter is imminent. Meanwhile, Professor James Moriarty, notorious criminal kingpin, plots to thwart the upcoming opium vote. When a drowned body is discovered, and Lord Neville goes missing, Scotland Yard turns to “the world’s only consulting detective” and newest resident of 221-B Baker Street:  a certain Mr. Sherlock Holmes.

PERFORMANCE SCHEDULE AND TICKET INFORMATION
Sherlock Holmes will be staged at The Ed Mirvish Theatre (244 Victoria St.) from October 27 to November 8 with performances Tuesday – Friday evenings at 8:00 pm., Saturdays at 2:00 pm and 8:00 pm and Sundays at 2:00 pm and 7:30 pm.