• Buy the CD on iTunes 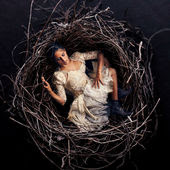 A sound that is as difficult to define as life is to confine, the music of Rupa & the April Fishes pulls from eight years of street parties, festivals and symphonic concerts on three continents, three studio albums, one live album and one string quartet recording in the making, several languages from English to Tzotzil to French, many musical traditions, countless moments of joy, sorrow, loss, and transformation and a fierce independent spirit.

From the exquisitely sensitive engineering by Adam Munoz at Fantasy Studios, to the longterm partnership with producer and bassist Todd Sickafoose to the impeccable arrangements by composer Mark Orton to the fiery renditions played by Quartet San Francisco to the incredible lineup on the album which includes drummer Allison Miller, guitarist Adam Levy, saxophonist Prasant Radhakrishnan, accordionist Rob Reich and the one-and-only clarinetist Ben Goldberg--this album is a serious audio treat.