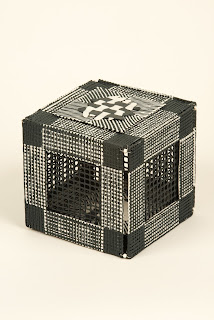 Halifax ceramist Alexandra McCurdy merges ceramics with textiles to create boxes filled with mystery as part of her new exhibition, Crossing Material Boundaries, running October 1 to 25 at David Kaye Gallery. The exhibit marks McCurdy’s recent induction into the Royal Canadian Academy of the Arts after a 50-year career in ceramics.

Alexandra McCurdy, ceramist/printmaker/independent curator, works in porcelain making highly decorative, one-of-a-kind, colourful pieces, informed by her longstanding interest in textiles. This exhibition features a series of ceramic boxes made from tiles created out lines of coloured clay. The tiles are fired and wired together with decorative materials to create boxes that are a metaphor for women – using the feminine principal of containment and enclosure, with the inner workings left to the viewer’s imagination. Image: Black Box with Weaving (Porcelain, wire and beads as connectors - 11X11X11cm)

Crossing Material Boundaries features nine ceramic boxes made from layered lines of coloured clay, or slip, which simulate the warp and the weft of weaving. Seven of the boxes are accompanied by wall pieces that feature similar slip trailed tiles on top of silk-screened backdrops.

“Alexandra’s McCurdy’s containers merge the techniques of textiles and clay, decorative surface and form. We are delighted to bring her boxes to Toronto to celebrate her recent induction to the Royal Canadian Academy of the Arts,” said David Kaye, owner of the David Kaye Gallery.

For the boxes, McCurdy wires the ‘woven’ tiles together and embellishes them with coloured computer wire, metallic thread, raffia or other textile symbols such as the spiral, used by women over the centuries. 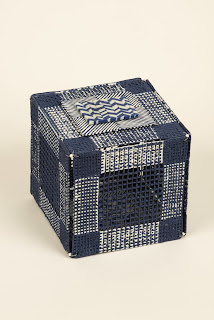 For most of her professional life as a ceramist, McCurdy has painstakingly created containers decorated with textile and fibre motifs. Mi’kmaq quill boxes, quilts, and hooked rugs which have supplied a rich source of decoration. Transplanting textiles to clay is one way for McCurdy to tell her story – maintaining the illusion of the decorative while pursuing control. Image: Blue Box with Herringbone (Porcelain, wire and beads as connector - 13X13X13cm)

McCurdy explains that the boxes have been compared to Japanese teahouses, Catholic confessionals and Muslim women’s burkas. They intentionally use the feminine principle of containment and enclosure, and are intended as a metaphor for women – decorative on the outside, with substance and secrets hidden within. The boxes also connect conceptually to the hidden potential of Pandora’s Box, the black box of an aircraft – influenced by McCurdy’s pilot father, who was shot down during World War II – and the Perspective Box by Dutch artist Samuel van Hoogstraten.

“I’m combining techniques used in ceramics and textiles to create vessels that push the envelope of traditional ceramics. They challenge the notion that ceramic pieces must always be functional. At the same time, they awaken the viewer’s curiosity. They invite the viewer to wonder ‘what’s inside the box?’” 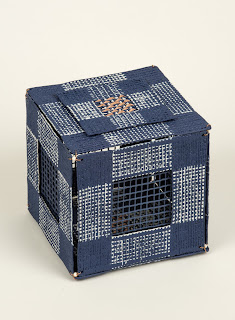 In recent years, McCurdy has explored the connections between women and craft. Women have traditionally done crafts for functional, practical reasons. The fragmented nature of women’s lives has influenced their technique – forcing them to work in portable components, just like the panels in McCurdy’s boxes.

“Over the years, women have traditionally been responsible for many roles – taking care of children, cooking, homemaking.  Component making is often the solution for women artists whose lives are fragmented with children, homemaking and other jobs. It’s a way to work for short periods of time, in between other duties.” Image: Blue Box with Copper Wire (Porcelain, wire and beads as connectors, copper wire - 13X13X13cm)