SAN FRANCISCO, October 13, 2015 – Music Director Michael Tilson Thomas (MTT) and the San Francisco Symphony (SFS) will release a live recording of Beethoven’s Piano Concerto No. 3 featuring Emanuel Ax and Mass in C major on the Orchestra’s Grammy Award-winning SFS Media Label on Friday, November 13, 2015. This is the fifth all-Beethoven album released by MTT and the SFS. Of this journey 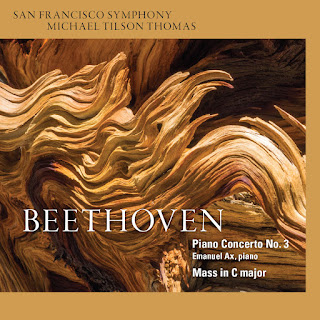 through Beethoven’s music, MTT states, “In our performances we have been exploring a lyrical, transparent approach to the music. This gives us an opportunity to hear the remarkable qualities of the players of the San Francisco Symphony.” The recording will be available as a hybrid SACD compatible with conventional CD players, and as a digital download — including as high-resolution 24-bit downloads — and on all major streaming services. The album is available for pre-order starting today on iTunes with Mastered for iTunes audio quality at iTunes.com. Piano Concerto No. 3 was recorded in 96kHz/24-bit audio September 26-28, 2013 and Mass in C major was recorded in PCM 192kHz/24-bit audio January 15-18, 2014, both in Davies Symphony Hall.

On recording with Michael Tilson Thomas and the San Francisco Symphony, Emanuel Ax shared, “I have known MTT for 40 years now since we first played together. I’m a total fan of his mind, and his musical approach. I feel very privileged to be part of a recording project with this orchestra and with Michael.”

Beethoven wrote Mass in C major in 1808, and later described it as “especially close to my heart.” MTT says of this work, “Mass in C unfolds in a way that says, ‘Please come inside and we’ll spend time together listening to something beautiful.' It’s enveloping and comforting. The soloists – Joelle Harvey, Kelley O’Connor, William Burden and Shenyang – are all lyric voices who can float phrases in a way that I’m sure Beethoven must have been imagining when he wrote them.”

This new recording joins four previous SFS Media recordings of Beethoven’s music by MTT and the San Francisco Symphony, and a Keeping Score documentary and concert of the composer’s Symphony No. 3, Eroica, available on DVD and Blu-ray. Of their recording of Beethoven’s Symphony No. 5 and Piano Concerto No. 4 with Emanuel Ax in 2011, Donald Rosenberg wrote in the Cleveland Plain Dealer, “Tilson Thomas leads a forceful, nuanced account of Beethoven's Fifth that shows his San Francisco Symphony to 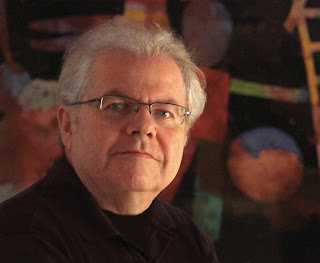 be in prime health. But the highlight of the disc is the performance of the Fourth Piano Concerto with Ax at his most crystalline and poetic. The relationships between piano and orchestra are beautifully defined, the music's grace, drama and joy bountifully conveyed.” MTT and the SFS also recorded and released Beethoven’s Symphony No. 7 and Leonore Overture No. 3. Beethoven recordings featuring the Grammy Award-winning San Francisco Symphony Chorus include Beethoven’s Symphony No. 9 and his Cantata on the Death of Emperor Joseph II and Symphony No. 2. Of MTT and the SFS’s Beethoven exploration, Blair Sanderson wrote on All Music.com, “Michael Tilson Thomas's super audio recordings of Beethoven's symphonies with the San Francisco Symphony deserve attention for their superb musicianship and extraordinary sound quality.” (Image of Emmanuel Ax by Maurice Jerry Beznos)

Soprano Joélle Harvey, a native of Bolivar, New York, first appeared with the San Francisco Symphony in 2009, singing the role of Leila in the semi-staged production of Iolanthe. Her most recent appearances with the SFS were during the Orchestra’s 2015 Beethoven Festival, in which she performed Missa solemnis and the role of Marzelline in a concert setting of Fidelio. Prior to that she performed the role of Solveig in the SFS’s January 2013 semi-staged production of Peer Gynt. Tenor William Burden made his San Francisco Symphony debut in 2012, and can be heard on the SFS Media recording of Beethoven’s Symphony No. 9 with Michael Tilson Thomas and the San Francisco Symphony. Mezzo soprano Kelley O’Connor made her SFS debut in 2008 in Haydn’s Mass in Time of War. Her most recent appearances were in this recording’s Mass in C performances in January 2014. She returns to perform with MTT and the SFS in June 2016, in Mahler’s Symphony No. 2, Resurrection. Born in Tianjin, China, bass-baritone Shenyang made his San Francisco Symphony debut in 2011, and most recently performed with MTT and the Orchestra in the June 2015 semi-staged production of Missa solemnis. 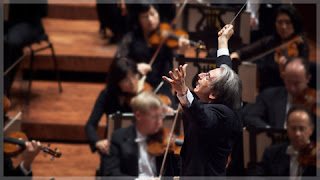 One of America’s most distinguished choruses, the 156-member San Francisco Symphony Chorus is known for its precision, power, and versatility. Led by Chorus Director Ragnar Bohlin, the Chorus performs more than twenty concerts each season and is comprised of 32 professional and 124 volunteer members. Recordings featuring the SFS Chorus have won a total of eight Grammy awards, including three for Best Choral Performance. They were featured on the SFS Media’s recording of Mahler’s Symphony No. 8 with MTT and the SFS, which won three 2010 Grammys, including the award for Best Choral Performance.

The San Francisco Symphony is widely considered to be among the most artistically adventurous and innovative arts institutions in the US. Led by Music Director Michael Tilson Thomas, the SFS presents more than 220 concerts annually, and reaches an audience of nearly 600,000 in its home of Davies Symphony Hall, through its multifaceted education and community programs, and a global audience through its media initiatives, national, and international tours.