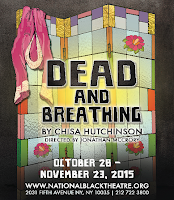 NEW YORK CITY- Cranky old broad, Carolyn Whitlock, has been in hospice for far too long and just wants to die already.  When she tries to convince a loud, oversharing, and very Christian nurse to assist her suicide, she has to work harder than she ever has in her privileged life to end it. Through surprising humor and persistent questioning, Dead and Breathing investigates morality, mortality and the intense tug-of-war between the right to die with dignity and the idea of life as a gift. The play stars Lizan Mitchell and Nikki Walker.