TORONTO - Canada’s first trilingual (English, Cantonese, Mandarin) crime drama will be premiering on November 8 on OMNI. It’s called Blood and Water and is about Charles, the son of a prominent real estate developer being found ritualistically buried and the cop assigned to the case who will be forced to tear his family apart and reveal long held secrets in order to solve the murder of their troubled middle son. 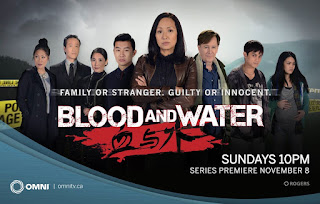 While race relations is a subject that the public and media often dance around, Blood and Water is the show to change this, and delve into a discussion that has only had the surface scratched. Blood and Water will expose audiences to a grittier side of characters that have long been made two-dimensional.

Two of these characters are Paul (Charles’ brother) and Teresa (Charles’ girlfriend) played by Simu Liu and Loretta Yu respectively. Simu and Loretta are a tale as old as time. Boy meets girl at audition – they don’t fall in love – they continuously meet at auditions – and then land roles together in Blood and Water and become the best of friends.

“We are so proud to be the first Canadian broadcaster to bring a home-grown mainstream Chinese crime drama series to our audiences,” said Colette Watson, Vice President of Television & Broadcast Operations, Rogers. “With a complex storyline and well-developed characters, Blood and Water is a drama that will resonate not only with language audiences, but with all Canadians. We believe so much in the appeal of this series that development is already underway on Season 2.”

In the premiere episode, after Jo is hit with an unexpected diagnosis of cancer, she is given the assignment of lead detective in a complicated homicide. The drug addicted son of a prominent family has turned up dead and ritualistically buried in the endowment lands. With everything at stake, the pressure is on for Jo to quickly solve the crime and make the department look good in this high profile case, before the clock runs out.