• Buy Tickets
• Join us on Wednesday, November 4 for a post-performance Q&A.

Christopher House’s Echo is a captivating hybrid creation, a new production and a remix of his provocative dance-theatre work Echo’s Object (2005). An incisive look at narcissism and the manufacture of the self, the 2005 work was described by The Globe and Mail as “… asking personal questions that we have always privately asked ourselves.” Echo (2015) delves deeper into this world, using movement, music and design in an unsettling landscape of dreams, impulses and surprising juxtapositions.

Christopher House builds on images from his “fresh and original” (The Globe and Mail) Echo’s Object (2005) to create a dynamic new production called Echo in which ten dancers inhabit a world of beautiful creatures, dark angels and lost souls. With costumes by Jeremy Laing, lighting by Steve Lucas, décor by Cheryl Lalonde, and sound track by Phil Strong and Thom Gill, Echo is a visually stunning work of dance theatre that looks forwards and backwards in time. 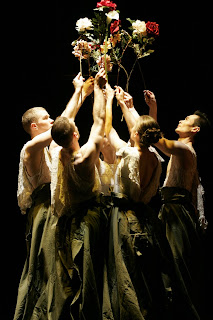 About the Choreographer
Artistic Director of TDT since 1994, Christopher House has contributed over sixty works to the company’s repertoire which have been presented across Canada and in such major centres as New York, London, Berlin, Tokyo and Beijing. His many honours include three Dora Mavor Moore Awards, the Muriel Sherrin Award for International Achievement in Dance and the Silver Ticket Award for Lifetime Achievement in the Arts.  He has invited a growing number of artistic innovators, both Canadian and international, to participate in TDT’s creative projects and continues his performance work, in particular through his solo adaptations of the choreography of Deborah Hay. His performance of Hay’s work in 2012 garnered him a Dora Mavor Moore award nomination for Outstanding Performance.