New York, November 18, 2015 -- New York City is considered the center of independent cinema in the US. The large number of film festivals that showcase independent films from all over the world in New York City is remarkable. The African Diaspora International Film Festival (ADIFF) is one of those festivals.

The 23rd African Diaspora Film Festival is to be held in Manhattan, New York City from November 27 to December 13 at MIST Harlem, Bow Tie Chelsea Cinemas and Teachers College, Columbia University with the presentation of more than 50 films, including 26 US and NY Premieres.

Dedicated to showcasing independent films that explore the human experience of people of color, ADIFF has enriched for many years the cultural landscape of New York City and is proud to announce, as part of its 23rd edition, a selection of films Made in New York and/or directed by New York based filmmakers.

ADIFF 2015 FILMS MADE IN NEW YORK
• "The Bicycle" by James Richards is a Queens set family film that takes a child and an adult on a journey through the many worlds that make up their community thus connecting them in a way neither could have imagined. 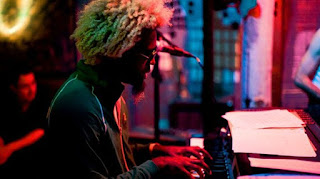 • "Cu-Bop: Cuba -- New York Music Documentary" by Shinichi Takahashi follows the gifted young Cuban pianist Axel Tosca who lives in New York City, and performs as the leader of (U)NITY, a band which fuses Afro-Cuban culture with modern jazz and hip-hop.
• "Shelter" by Paul Bettany and starring Jennifer Connelly and Anthony Mackie tackles drug addiction and homelessness in the streets of Manhattan.
• "The Challenger" by Kent Moran, featuring Michael Clarke Duncan in his last role,  is a boxing drama set in the Bronx.
• "Lift Every Voice" by Dallas Alexis is about a teacher who was able to get her students motivated and interested into the New York State/City High School  Regents' Exams by incorporating RAP and HIP-HOP into her lectures.

ADIFF 2015 FILMS MADE BY NEW YORK BASED FILMMAKERS
• Stanley Nelson will present his latest documentary "The Black Panthers: Vanguard of the Revolution" about the rise and fall of the Black Panther Party during the 1960s and beyond 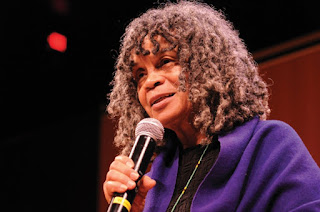 • Sabrina Schmidt Gordon will present her documentary "BaddDDD Sonia Sanchez" about the legendary poet, playwright, activist and seminal figure in the 1960s Black Arts Movement (pictured right).
• Carol Bash will present her documentary "Mary Lou Williams: The Lady Who Swings The Band" about the pianist and composer who helped shape the sound of 20th century America with her innovative style.
• Jordi Torrens will present "Invisible Heroes: African American in the Spanish Civil War" which tells the remarkable story of African Americans who fought as volunteers in Spain for democracy and for civil rights that were denied to them in their own country
• Melissa Lefkowitz and Dorian Carli-Jones will present their film "China Remix" a short documentary that explores  the Chinese city Guangzhou"™s burgeoning African entertainment industry. 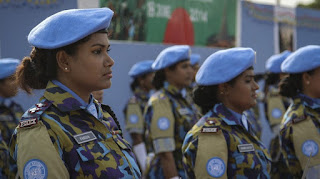 • Geeta Gandbhir will present her documentary "A Journey Of A Thousand Miles: Peacekeepers" which follows three women in an all-female, predominantly Muslim unit of police officers sent to post-earthquake Haiti as UN Peacekeepers for one year.
• James Richards, director of "The Bicycle" and Dallas Alexis, director of "Lift Every Voice" are also New York based filmmakers.

The African Diaspora International Film Festival is a 501(c)(3) not for profit organization.
....that showcases films about the human experience of people  of color all over the world
....that offers an alternative world view
....that enhances the cultural landscape of the USA
....that encourages dialog across communities
....that could use your support