Comedy, Music, Booze and Hummus: Live at the Annex December 1 2015 in Toronto

December 1, 2015
‘The Garage,’ at the Centre for Social Innovation 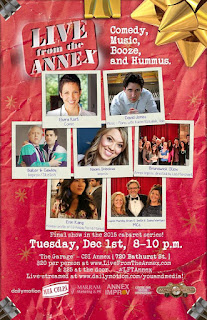 Torontonian funny gal Elvira Kurt is known for signature spark and quick quipping. According to a Chilliwak News article, “She earned her chops with Second City, wrote material for This Hour has 22 Minutes and Ellen DeGeneres, was nominated for a Gemini award, and has hosted a variety of both radio and television shows. You might recognize her from CBC’s Debaters, The Comedy Network, as the host of Q’s Hall of Shame or YTV’s Cook’d. No matter what you know Elvira from, she proves time and time again that she is one of Canada’s best-known and most-loved comediennes for a reason!” (for a video bio, see https://www.youtube.com/watch?v=3EXSce2h2yY). 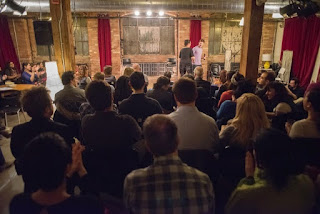 This is the final ‘Live from the Annex’ show in 2015, capping a nine-show series that began with a pilot on April 7 running monthly on the first Tuesday. Doors open at 7:30 p.m., with curtain at 8 p.m. Beer, wine and refreshments are offered for sale before, during and after intermission at the CSI Coffee Pub. Hummus and chips are provided gratis.

The ‘Live from the Annex’ show runs the first Tuesday of every month in 2015, 8 p.m. – 10 p.m., and takes place in ‘The Garage,’ at the Centre for Social Innovation - Annex location, 720 Bathurst Street, Toronto. Beer, wine and refreshments are offered for sale before, during and after intermission at the CSI Coffee Pub. $25 tickets are available at the door, with $20 advance tickets at the link and livefromtheannex.com. Follow on Twitter #LFTAnnex and Facebook.

Live from the Annex’s Dec 1 Holiday Party Show is pleased to profile the CSI Holiday Pop Up Market whose event is on Thursday, December 3, 12p.m. – 3p.m., followed by the Sustainable (Un)Professionals SOCIAL presented by #GreenPeopleTO – 5p.m. - 9p.m., both at CSI Annex, Main Level. The December 3 Pop Up is an opportunity for Toronto’s artists, entrepreneurs, and social enterprises to convene and showcase their goods and work for the city to see, and socialize with people from different sectors in a casual and open setting.