Reggae at the GRAMMYs: Ghana's Rocky Dawuni Goes for Gold 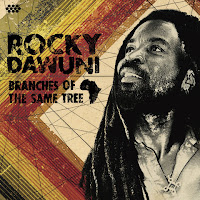 We are happy to announce that Cumbancha artist Rocky Dawuni's latest album, Branches of the Same Tree, has just been nominated for a GRAMMY in the Best Reggae Album category. Dawuni, the only non-Jamaican artist in the running this year and the first Ghanaian to be nominated, is up against some of the heavyweights of modern reggae including Morgan Heritage, Luciano, Jah Cure, and Barrington Levy. It is also marks the first Cumbancha album to receive a GRAMMY nomination.

Reflecting on the prestigious nomination, Dawuni says that he feels, "truly honored and at the same time humbled. I’ve always focused on giving my best in my work and it’s a good feeling to know that it is being appreciated. I am grateful for the recognition. Branches of the Same Tree is about stressing the common roots that we all share in this human family. It inspires the listener to aspire to a place of hope. It’s about having faith in the power of compassion and oneness."

The final ballots to determine the GRAMMY winners are due by January 15th, 2016. If you are a voting member, we encourage you to include Rocky Dawuni on your ballot. The 58th Annual GRAMMY Awards will broadcast live on CBS on Monday, Feb. 15, 2016, at 8 p.m. ET/PT.

About the album 'Branches of the Same Tree'
Influenced by the soulful beats of Afrobeat legend Fela Kuti, the positive messages and deep grooves of Bob Marley and the infectious, sing-along anthems of Michael Franti, K'naan and Matisyahu, Rocky Dawuni's songs straddle the musical boundaries between Africa, the Caribbean and the US to create a universally appealing sound that unites generations and cultures.