“It’s written on the walls of this hotel, you go to heaven, once you’ve been to hell”
– Leonard Cohen 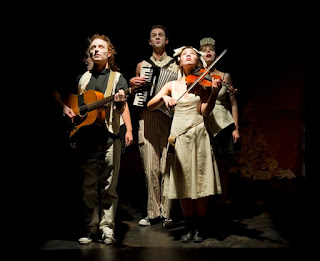 Fresh from a sold-out national tour, Leonard Cohen’s powerful and inspirational music is the heartbeat of this eclectic cabaret of loves won and lost. With extraordinary arrangements, six performers play seventeen instruments in this rollicking tribute to the remarkable writer. Through Cohen’s transcendent songs and lyrical honesty, you will be transported to New York’s infamous hotel – a place full of music and enchantment, desire and passion.

The show originated in Vancouver:

Chelsea Hotel is directed and conceived by Tracey Power with musical direction and arrangements by Steven Charles.

A recipient of the Sterling Haynes and Jessie Richardson awards for her work, Tracy Power’s work has played in theatres across Canada and Internationally. She recently premiered a new musical Miss Shakespeare at Performance Works in Vancouver, and workshopped a new play, Glory based on the Canadian Women's hockey team, the Preston Rivulettes at the Citadel Theatre in Edmonton. Tracy also works as an actor, director and choreographer. She recently directed and choreographed Singin' in the Rain for the Chemainus Theatre Festival and choreographed Les Misérables for Western Canada Theatre.

Steven Charles is a musician, composer and performer from Vancouver. He has performed at the Firehall Arts Centre and Arts Club, along with many Folk, Fringe, and Jazz Festivals across Canada, the U.S, and Europe.  With the Escape Artists, Steven co-produced Miss Shakespeare and J. Caesar and he continues to perform in productions of Chelsea Hotel in theatres across Canada. He tours internationally with bands Viper Central, and The Fugitives and is very active in Vancouver's music scene.