on December 15, 2015
Travel/Art
In Search of Bauhaus: Dessau, Berlin & Weimar

The Bauhaus, or Staatliches Bauhaus, was an avant-garde movement in modernism that sprang into being in 1919 in Weimar, Germany, when Walter Gropius founded a school of design with a unique philosophy. It was one of the first academies of design and brought together leading architects and artists of the time. The Bauhaus philosophy synthesized fine arts, architecture, crafts and industrial design in a movement that exerted a huge influence on everything that came after.

Gropius gathered together a who's who of avant garde artists of the day, including Lyonel Feininger, Johannes Itten, Wassily Kandinsky, Paul Klee, Oskar Schlemmer and László Moholy-Nagy, assembling them at his school in Weimar.

The school featured innovative teaching methods and workshops and produced work that still influences the world of art, architecture and design today, including the trademark cuboid functionality as an architectural principle.

Tracing the path of Bauhaus from its inception to its folding under threat of the hostile and newly elected National Socialist government in 1933 makes for a fascinating way to explore culture, modernism and early twentieth century German history.

Weimar
Weimar is the birthplace of Bauhaus, where Walter Gropius first founded the school in 1919. Nowadays it is home of the new Bauhaus-Museum, part of the Weimar Classics Foundation. The Bauhaus-Museum features a collection of over 10,000 items in over 200 exhibits, including paintings by Klee and Feininger, household objects and furniture.

The Museum is housed in a former coach house that was rebuilt by Clemens Wenzeslaus Coudray, a neo-classical architect.
Address: Theaterplatz 1, 99423 Weimar, Germany
Phone: +49 3643 545401
Website: http://www.klassik-stiftung.de/en/institutions/museums/bauhaus-museum-weimar/?noMobile=1


Stay Bauhaus
Hotel Elephant
This elegant hotel overlooks the market square, mere minutes walk from the Museum. Expect the ornate ambiance of yesteryear from this establishment that dates back to 1696, featuring a grand spiral staircase. The element of historic opulence combines with Bauhaus influenced interior design, including a sumptuous suite named after Bauhaus master Lyonel Feininger and a brasserie where Goethe once hung out.

Dessau
Driven out of Weimar in 1925, the Bauhaus group re-established itself Dessau in 1926. Here, you can visit the art school that Walter Gropius designed along with the master's houses where the instructors lived. The buildings feature the Bauhaus school's characteristic cuboid forms and are now on the UNESCO list of World Cultural Heritage sites. The museum features various permanent exhibitions, events, educational opportunities and more.

Stay Bauhaus
Sleep like a Bauhausier inside the Studio Building
Completed in 1926, the Studio Building was home to junior masters and the most promising students and counted Josef Albers, Erich Consemüller, Herbert Bayer, Franz Ehrlich, Walter Peterhans, Hannes Meyer, Gertrud Arndt, Marianne Brandt, Gunta Stölzl and Anni Albers among its residents. Now you can join them! One room was accurately reconstructed with original objects and furniture while the others are personalized to reflect a former habitant, beginning with Alfred Arndt, the couple Albers and Franz Ehrlich.

Berlin
In 1932, the Bauhaus school relocated a third and final time to Berlin. Closely linked as it was to the Weimar Republic that was established between WWI and WWII, it became an instant target of Nazi aggression - the Nazis accused the school of being a hotbed of communist intellectualism - and folded for good in 1933 with their rise to power. Today, Berlin is home to the world's most extensive collection on the history of the Bauhaus school at The Bauhaus-Archiv. 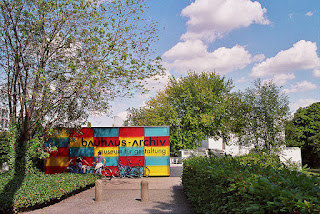 Stay Bauhaus
Hotel Ku' Damm 101
The Hotel Ku' Damm 101 gives you the Bauhaus experience at budget-priced convenience and a great location along famous Kufurstendamm (the "Ku'damm" of the name). Inspired by the work of French architect Le Corbusier, a mentor to the Bauhaus crowd, the interior has a space-age feel with sweeping curved lines and bold colour pops.