TORONTO – TUESDAY, JANUARY 5TH, 2016 – Award-winning, jazz singer-songwriter Ori Dagan announces the release of his original song "Clap on the 2 and the 4" on iTunes today, with an accompanying music video on YouTube. The single, already sitting at #2 on the iTunes jazz chart in Canada, precludes Dagan’s forthcoming and third album (a Tribute to the music of Nat King Cole), which is due to be released in the fall this year. 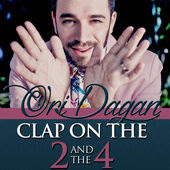 Written by Ori Dagan, the catchy, rhythmic tune "Clap on the 2 and the 4" is about finding one’s rhythm and it was inspired by the artist’s greatest inspiration in jazz, Ella Fitzgerald. Dagan comments, "She had a magical way of bringing joy to listeners, and her incomparable sense of swing was infectious in the best sense of the word. At one point when I was writing the tune, I could hear her singing it in my head, so I dedicate it to her for endless inspiration."

"Clap on the 2 and the 4" features a blazing saxophone solo from rising star Alison Young, backed by a rhythm section of Scott Metcalfe on piano, Jordan O’Connor on bass and Lowell Whitty on drums. The single was produced by Eric St-Laurent and recorded at Euphonic Sound in Toronto.

The music video for "Clap on the 2 and the 4" was directed by award-winning filmmaker Leonardo Dell’Anno, and includes listeners of all ages, as well as two cats, two birds, two dogs and a horse. There are also cameo appearances by Jeanne Beker, the multi-media fashion entrepreneur and host of Fashion Television for 27 years, as well as stellar jazz vocalist Alex Pangman, known affectionately as "Canada’s Sweetheart of Swing."