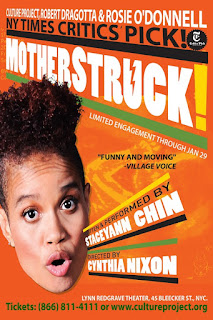 “Ms. Chin has such a magnetic presence… that you might almost believe that she was unspooling her story for you alone.” – Charles Isherwood, The New York Times

Directed by Emmy, Tony, and Grammy Award winner Cynthia Nixon (Sex and the City) and produced by Rosie O'Donnell, Robert Dragotta and Culture Project, MotherStruck! sets forth Staceyann Chin’s (Russell Simmons' Def Poetry Jam on Broadway) personal journey to motherhood as a single woman, lesbian and activist who does not have health insurance or a “serious, stable financial set up,” but wants to have a child. Told through Chin’s uniquely personal and poetic lens, this solo show explores how the process changed her life and how she makes peace with what she learns from this profound experience. Ultimately, MotherStruck! is about family -- who is family and what makes a family. That being said, you will not want to miss this critically-acclaimed performance.