on February 18, 2016
With material from media releases:

• Discover more about the Emilia Romagna

The Emilia Romagna is a region in northern Italy that lies between the River Po to its north and the Apennine Mountains (to its south). It is one of the most fertile and productive regions of Italy, thanks to the mitigating effect of the Adriatic Sea on the coastal climate.

This is the land of Verdi’s novels and Giovanni Pascoli’s poetry, as well as Fellini’s unmistakable cinema - a director who became a legend through his many masterpieces that come to life in this, his native region. In Emilia Romagna, the old architecture blends into green hills. The landscape offers everything from beaches to thermal springs; salt lagoons to hills covered in fruit orchards and other crops.

Emilia Romagna sits on the border with the third-smallest country in Europe, the Republic of San Marino. The provinces of the region are: Bologna (the region's capital), Ferrara, Forli-Cesena, Modena, Parma, Piacenza, Ravenna, Reggio Emilia, and Rimini. 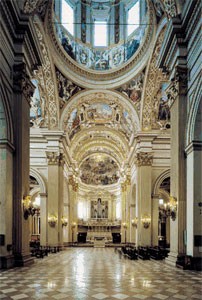 Ten Must See Art Treasures
There are far too many art treasures to enumerate them all here - this is just a list to start off your explorations of this region that is rich in both natural and manmade beauty.

I. The Basilica della Beata Vergine della Ghiara (left) features glorious vaulted ceilings adorned with the work of Franceso Paccioni, located in Reggio Emilia, a village with narrow streets and public squares where the locals gather.

II. In Parma, the Teatro Farnese is a must see - an architectural wonder that belongs to the grounds of the rather austere Palazzo Pilotta. The Teatro is made all of wood and festooned with ornamental sculptures - be sure to allow a good chunk of time to take it all in.

III. In Piacenza, dahlings, you must view the gorgeous Tondo by Botticelli, on view at the Civic Museum of the Palazzo Farnese – and while you are at it, check out the Farnese's Horses, two large bronze equestrian statues you'll find in the central Piazza Grande.

IV. In Modena, you will swoon over the Romanesque architecture of the Duomo, Torre Ghirlandina and Piazza Grande, on the list of UNESCO World Heritage Sites.

V. There is so much to see in Bologna, but you must make time to hunt down the stunning Lamentation over the Death of Christ by Niccolo dell'Arca – a mesmerizing scream frozen in stone dating from the late 15th century in the sanctuary of the Santa Maria della Vita Church (near the Piazza Maggiore).

VI. In Ferrara, the Palazzo dei Diamante is a stunning piece of late 15th century architecture. Built in 1493 by Biagio Rossetti, the marble exterior is embellished with diamond shaped studs - no less than 8,500 of them.

VII. In Ravenna the spectactular mosaics make the interior of the Basilica of San Vitale shimmer and glow. It's definitely worth oohing and aahing over one of the most important surviving examples of early Christian/Byzantine mosaic art housed in a cathedral that dates back to the 6th century.

VIII. Faenza is renowned for a ceramic industry that took root in the city during the Renaissance. The Museo Internazionale della Ceramische houses a large collection of enchanting pieces both historical and contemporary - the largest ceramic collection in the world.

IX. In Forli Cesena, the  Malatestiana Library, also known as the Malatesta Novello Library is a UNESCO World Heritage Site – with an architectural style typical of the Mediterranean. Laid out like a basilica, it features three naves divided into rows with 10 decorated and embellished columns each. It was the first European library that was owned by the municipality and open to the public. Open in 1454, it is the last ancient library that dates from before the invention of the printing press.

X. In Rimini – where the 14th century was a golden era of artistic production – you'll find an art school founded by Giotti and displays of his work and that of his students in several locations throughout town, including the crucifix in the Malatesta temple.

The Art of Cuisine
The region is known for its bold and refined cuisine, from those of the countryside of Emilia to those of the Romagna coast, via the lagoon of the Comacchio Valleys, with its famous eels.

Discovering a region means tasting the results of its traditions, from the typical Erbazzone, a quiche with spinach, or the pisarei e faso, small dumplings with beans made in the area of Piacenza, to the tortelloni, agnolotti and all types of homemade pasta enhanced by their delicious fillings, herbs and flavors.

And how can you visit Bologna without trying its mortadella, perhaps inside rolled or folded piadina bread? The unquestioned king of Parma, yet well-known and enjoyed all over the world, is of course Parma Ham (Prosciutto di Parma) that, together with the wonderful Grana and legendary Parmigiano cheeses, are the pride of this land's gourmet traditions.

As in all Italian regions, good wine in Emilia Romagna is a given: Gutturnio, produced in the hills of Piacenza,Trebbiano, Lambrusco, Barbera, Sauvignon and Sangiovese.

More To Do!
Many who love the combination of sun, sea and entertainment choose the Romagna Riviera. It possesses the longest beach in Europe, and is where visitors flock to enjoy its sport offerings and leisure facilities. Towns such as Rimini, Riccione and Cattolica have loads of attractions and facilities emphasizing relaxation and fun.

There are not one but two Ferrari Museums located in Modena and Maranello.

Further from the coast, the beautiful landscape of the Apennines, for instance, makes the region ideal for horseback riding or trekking in the area between Parma and Piacenza. Make a visit to the splendid parks and wonderful nature reserves for your nature fix.

The hinterland features several wellness spas like Salsomaggiore and Bagno di Romagna, due to its many types of water springs, as well as modern facilities and technology.