Hot Cup Records is proud to release Still, Up in the Air, the first solo album by bassist Moppa Elliott. The album was recorded on February 16, 2015 at St. Stephen's Pro Cathedral in Wilkes-Barre, PA, a space that has served as the venue for several other Hot Cup releases.  Primarily known as the leader of the ensemble, Mostly Other People Do the Killing, Elliott demonstrates both his mastery of the double-bass and his personal approach to solo improvisation.  The recording will be released on February 12, 2016 and Moppa celebrates with a concert on February 16 at Shapeshifter Lab in a concert that includes MOPDtK and solo sets by Moppa. 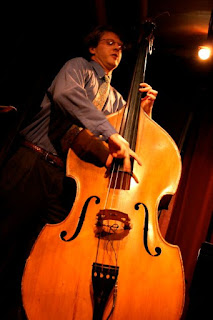 There is a long and storied history of solo bass recordings and Still, Up in the Air adds something new.  While the influence of Barre Phillips, Malachi Favors, Dave Holland, and Barry Guy cannot be ignored, the music on this recording is an attempt by Elliott to improvise in a way that eschews the typical conventions of linear, developmental forms favored by many other players. Elliott cites authors such as David Foster Wallace and Milorad Pavic as influences on his non-linear approach, as both create books that prevent the reader from progressing sequentially from page to page.  Elliott's performances on Still, Up In the Air jump from idea to idea rapidly in order to simulate a similar effect.  Elliott also drew inspiration from the 20th century's Cubist painters to create disjunctive forms that shift in perspective without assembling a unified whole.

Elliott's approach to the double-bass in a solo context incorporates not only all of the standard pizzicato and arco techniques of traditional bass playing, but also explores his own wide vocabulary of extended techniques including several new approaches to polyphony.  The variety of articulations used, both arco and pizzicato, enable him to cover a vast range of sonic space in a single improvisation.  All of the music was recorded live and the album includes a single edit, splicing together "Sequence Six" and "Sequence Twelve" into a single track.  Each piece draws on Elliott's experience performing in a wide variety of contexts including jazz, solo recitals, orchestral playing, and improvised music.  This recording offers the listener both an opportunity to hear Elliott's unique and personalized language of solo improvisation as well as another side of his well-established musical personality.

Moppa Elliott is best known as the composer, bassist, and bandleader for the widely heralded band "Mostly Other People Do the Killing."  The ensemble recently won the El Intruso Critics' Poll in the "Best Band to Hear Live" category and released Mauch Chunk, their eighth studio album.  In 2014, MOPDtK released Blue, a note-for-note recreation of Miles Davis' masterpiece Kind of Blue.  In addition to performing, Elliott runs the Hot Cup Records label and teaches music at St. Mary's High School in Manhasset, NY.