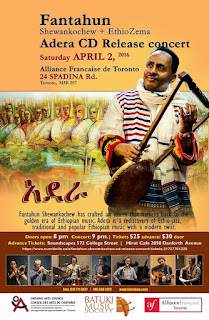 Fantahun Shewankochew has crafted an album that harkens back to the golden era of Ethiopian music. Adera is a rediscovery of Ethio-jazz, traditional and popular Ethiopian music with a modern twist.

Fantahun Shewankochew is an accomplished krar player, vocalist, composer and arranger, inspired by the late Tilahun Gessesse to pursue a musical career. From his early years working in the Ethiopian National Theatre until his arrival in Canada in 2011, Fantahun has performed in many countries around the world and released a number of recordings. He is well experienced in traditional and popular music genres from Ethiopia. Ethiopian music uses an essential modal system (pentatonic scale), which is called "qenet." There are four main modes of qenet: tezeta, bati, ambassel and anchihoy. He is now based in Toronto where he has performed at the Harbourfront Centre, Alliance Francaise de Toronto, CBC's Glen Gould Studio, the Music Gallery, Lula Lounge, Gladstone Hotel and the Luminato Festival.

The Ethio-Zema ensemble is truly impressive as it composes of talented musicians and artists based in Toronto. The lineup features vocalist Fantahun Shewankochew on acoustic krar, Daniel Barnes on drums, Tom Juhas on guitar, Simeon Abbott on piano, Liam Smith on bass guitar, John Maclean on saxophone, Steve Dyte on trumpet and Paul Tarusov on trombone. 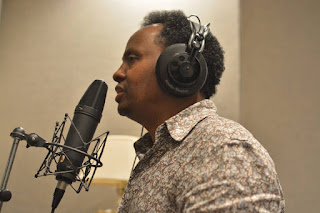 
Fantahun Shewankochew thanks the Ontario Arts Council for their support.