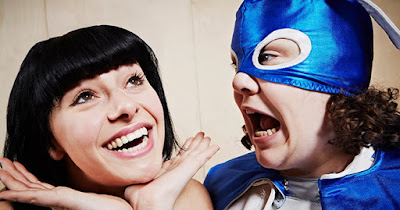 Combining storytelling, comedy and puppetry, Backstage in Biscuit Land presents an intimate glimpse into Thom’s unique perspective as a performer and woman with Tourette Syndrome. As a result of her tics, Thom says the word “biscuit” 16,000 times a day. She loved the theatre as a child, but the intensity of her tics made it increasingly difficult to attend. After being asked to sit in isolation while attending a theatre performance, Thom discovered the only place in the theatre she wouldn’t be asked to leave was the stage. Playful, spontaneous and laugh-out-loud funny, Backstage in Biscuit Land shows first hand that making theatre inclusive makes it better.

“At World Stage, everyone is welcome to experience theatre and we look forward to a true exchange of ideas through Backstage in Biscuit Land and other performances,” said Artistic Director Tina Rasmussen. “Jess Thom offers an incredibly empowering performance that is refreshing, honest, intelleigent and humourous.”

In associaton with Touretetteshero, co-founded by Thom to increase awareness of Tourette Syndrome and its challenges without self-pity or mockery, World Stage is introducing Relaxed Performances for Backstage in Biscuit Land in order to allow all audience members to feel comfortable in the theatre. Relaxed Performances are designed to welcome people who would benefit from a relaxing of traditional theatre etiquette and the expectations of stillness and silence. Adjustments often include gentler lighting and sound, relaxed attitudes to noise and movement in the theatre, and a general awareness amongst audience and staff of the possibility of disruption.