• Buy the CD
• Check out their tour dates including May 6 in Brooklyn, NY 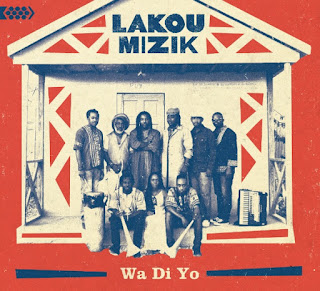 Lakou Mizik is a multigenerational collective of Haitian musicians formed in the aftermath of the devastating 2010 earthquake. The group includes elder legends and rising young talents, united in a mission to honor the healing spirit of their collective culture and communicate a message of pride, strength and hope to their countrymen and the world.

Music is at the core of Haiti’s sense of identity, and musicians have always played an important role in society, both in documenting the country’s history and helping to shape its path forward. Today, a young generation of artists is keeping this tradition alive, narrating the world they live in through music that is made in their neighborhoods, villages and post-earthquake camps. Lakou Mizik brings together these musical generations in celebration of the cultural continuum while using Haiti’s deep well of creative strength to shine a positive light on this tragically misrepresented country.

The idea for the band was hatched in 2010 on a hot November night in Port-au-Prince. Haiti was still reeling from the earthquake, a cholera epidemic was raging and a political crisis filled the streets with enough tire burning ferocity to close the international airport. Steeve Valcourt, a guitarist and singer whose father is one of the country's iconic musicians, singer Jonas Attis and American producer Zach Niles met in Valcourt's muggy basement studio and agreed that Haiti's music and culture could serve as an antidote to the flood of negativity. 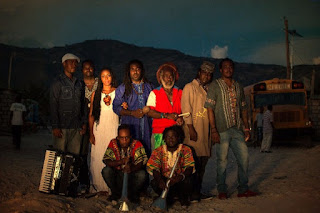 Niles, who ten years previously was part of the documentary film and management team that introduced Sierra Leone's Refugee All Stars to the world, had traveled to Haiti to explore ways in which music could help play a role in recovery and empowering social change. According to Niles, "I always wanted to use music and story of musicians to create a deeper connection to the country than either the one-note negative press or the falsified hope-and-inspiration NGO stories that get pushed to the public." Niles, Valcourt and Attis assembled an exceptional lineup, creating their own musical A-Team, a powerhouse collective of singers, rara horn players, drummers, guitarists and even an accordionist.

Over the next few years, the band honed their electrifying live show, presenting hours long concerts that blended the soulful spirit of a church revival, the social engagement of a political rally and the trance-inducing intoxication of a vodou ritual. Finally, after building a devoted local fan base, the band headed to the Artists Institute in Jacmel, home to a beautiful new recording studio and music school built by the We Are the World Foundation to help develop Haiti's music industry. 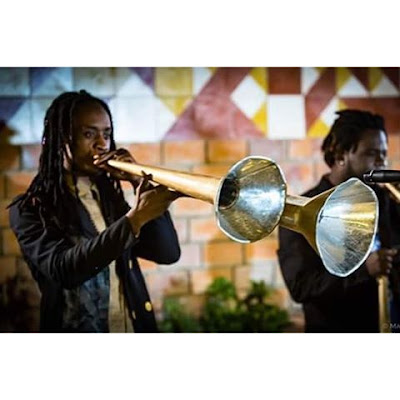 The resulting album, Wa Di Yo, reflects the African, French, Caribbean and U.S. influences that collide in Haiti. The spirit-stirring vodou rhythms and call-and-response vocals are supported by the French café lilt of the accordion. Intricate bass lines and interlocking guitar riffs mesh mesmerizingly with the joyful polyrhythmic hocketing of rara horns. These powerful layers are topped by sing-along melodies with inspiring, socially conscious lyrics. The end result is a soulful stew of deeply danceable grooves that feels strangely familiar yet intensely new -- and 100% Haitian.