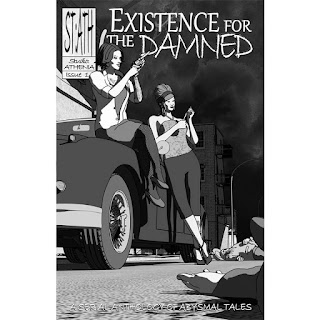 Existence for the Damned is a mult-genre comic series on distinctly noirish themes intended for a mature reader.

The Story Arc
In an act of heartbroken desperation a man takes his own life. He is then condemned to wander throughout time and space destined to die again and again.

Story settings range from the 17th to 22nd centuries involving countries on every continent and occasionally venturing out into space.

Issue #1
You enter a beautifully rendered black and white world - appropriate for the noir theme - a world of characters trying to chase away their demons with drink.

Our hero starts the night in a bar that quickly spins out of control. Grieving his lost love, he is led astray by two women, one of whom bears an inordinate resemblance to his late wife. Such hook ups seldom end well, especially when the 'ladies' in question have a secret that will change his life...
adult graphic novel graphic novel indie comics noir comic serial story