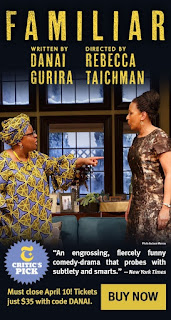 It’s winter in Minnesota, and a Zimbabwean family is preparing for the wedding of their eldest daughter, a first-generation American. But when the bride insists on observing a traditional African custom, it opens a deep rift in the household. Rowdy and affectionate, Familiar pitches tradition against assimilation, drawing a loving portrait of a family: the customs they keep, and the secrets they bury.

Danai Gurira is an award-winning playwright and actress. Danai’s play Familiar received its world premiere at Yale Repertory Theatre directed by Rebecca Taichman.  As an actress, Danai currently stars as Michonne, one of the most popular characters in AMC’s critically-acclaimed original series “The Walking Dead.”