• Shows take place at 6 and 10 p.m. at Montage Music Hall.
• For more information on the Rochester International Jazz Festival line-up click on the link
Comprised of forward thinking and prodigiously gifted players, the Rhythm Future Quartet continues its deeply felt mission to situate Gypsy jazz firmly in the here and now. On Travels, scintillating original compositions, dazzling improvisation and one-mind ensemble playing convert the swinging string driven sounds of the past into a viable and vital style that speaks directly to jazz lovers of the present.   The album was released February 26, 2016 on Magic Fiddle Music.

As DownBeat publisher Frank Alkyer writes: “The future of Gypsy jazz is in good hands with the Rhythm Future Quartet.... Anick is a fluid violinist and Soikkeli flat-out blisters on guitar... The musicianship throughout this 13-song set is breathtaking.... Rhythm Future, indeed.  I look forward to listening to this group for a long, long time.”

Rhythm Future Quartet (named after the Django Reinhardt composition “Rhythm Futur”) has itself evolved since its self-titled 2014 debut recording. Where that critically acclaimed release drew on standards as its core repertoire, Travels is largely devoted to group originals, compositions that touch on the tenants of the Gypsy jazz style yet thoroughly reflect the contemporary mindset of the makers. These ten new pieces are interwoven with shrewd reinterpretations of Bireli Lagrene’s “Made In France,” Paul Durand’s “Je Sui Seul Ce Soir” and, in a slinky arrangement that signals the band’s willingness to expand the scope of the Gypsy jazz idiom, Lennon and McCartney’s “Come Together.” Each of these thirteen performances display the awing virtuosity and sublime lyricism of the featured instrumentalists as well as the enviable cohesion of a musical unit that breathes as a collective entity. 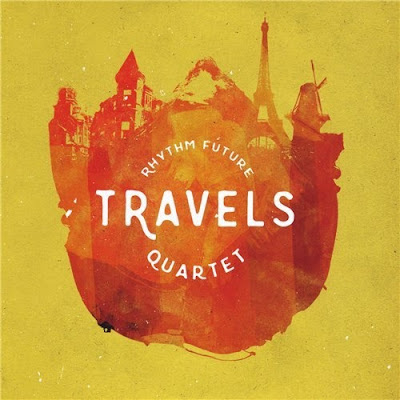 As its title infers, Travels reflects the nomadic nature of the band and its individual members. “Over the past two and a half years, the group has done extensive traveling all over the world,” Anick says, “We used this time to work together to compose and co-arrange all the material that culminated into this new record.” With over 50 different countries between the four members throughout their careers, traveling has certainly been a big part of both their group and individual development, expanding their musical and cultural horizons and ultimately inspiring new compositions that tie all of these experiences together. Besides the literal sense of the word, Anick states, “This album also travels in the musical sense, traversing various musical landscapes from around the world, which opened up new rhythmic and melodic possibilities and allowed the group to take its Gypsy jazz influenced music into the future.” The international influences are easily heard in such Anick pieces as “Vesella” which incorporates Balkan music rhythms within the mix, and “Amsterdam” and “The Keeper” which are inflected with Latin rhythms and textures.

If rousing performances including “Bushwick Stomp” (which celebrates Finnish guitarist Soikkeli’s move to his present Brooklyn home) and “Don’t Tell Me” and “Made In France” are within the traditional Gypsy jazz vein, such pieces as “Travels,” “Still Winter” and “Round Hill” speak of RF’s new musical expression, a vision that makes effective use of more atmospheric textures and reflective moods. “We want to bring it all to the table,” Anick says, “Variety is valuable for our listeners and for us as players.”

Clearly this is not the Gypsy jazz for purists. “Instead of putting our own stamp on beloved material we are trying to bring new material to the forefront,” Anick states. “We’re trying to bridge a gap. We aim to draw in listeners that respond to the best of the tradition–the energy, the rhythm, the exciting virtuosity, the deep emotion­–and then take a leap of faith and open their ears up to new soundscapes. We as a group are trying to prove that a music normally associated with older players can now provide personal expression for younger players of today.”

One of the youngest instructors at Boston’s Berklee College of Music, Jason Anick, now 30, is rapidly making a name for himself in the world of jazz violin and mandolin. In addition to leading his own contemporary jazz ensemble and performing with the Rhythm Future Quartet, Anick has been touring and recording with Grammy award-winning Nashville guitar virtuoso John Jorgenson since 2008 when he was recruited while still a senior at Hartt Conservatory. In addition to his work with the Rhythm Future Quartet, Anick has released two highly acclaimed albums as a leader, Tipping Point (2014) and Sleepless (2010). A versatile and sought after side-man, Anick has also shared the stage with an array of artists like Stevie Wonder, John Sebastian, The Jim Kweskin Jug Band, Tommy Emmanuel, and Delta Rae.

Olli Soikkeli was born in 1991 in Nurmes, Finland. He started playing guitar at the age of 12 and, once he heard the music of Django Reinhardt, he was hooked.  He’s been performing Gypsy jazz ever since and has performed in jazz clubs and festivals in Finland and beyond. He currently lives in NYC and has performed with Bucky Pizzarelli, Cyrille Aimee, Tommy Emmanuel, Anat Cohen and many more, garnering him the title, ‘the Finish Boy Wonder’.  He’s released two albums under his own name in addition to albums with Rhythm Future Quartet.  The Wall Street Journal heralded him as “a riveting Finnish guitarist who combines astonishing dexterity and speed with pure soul.”

Vermont native Max O’Rourke is quickly earning a reputation as one of the top young Gypsy jazz guitarists of his day.  The 19-year-old was the winner of the 2015 Saga Award from DjangoFest Northwest and is currently a student at Berklee College of Music.  In addition to performing with the Rhythm Future Quartet, he has shared the stage with the Gonzalo Bergara Quartet and the Grammy winning John Jorgenson Quartet.

Greg Loughman is an “emphatically lyrical” (JazzTimes), versatile and sensitive bassist who’s performed with numerous jazz greats including George Garzone, Curtis Fuller, Jerry Bergonzi, Joanne Brackeen, Mark Murphy, Sheila Jordan and many others. He currently leads his own indie rock group Lowman and performs with the John Funkhouser Trio, Klezwoods, and many others.