TORONTO – Toronto’s own high-energy, horn-band sensation TURBO STREET FUNK accelerate their forward motion with their new, sophomore album, MOMENTUM. Known for their explosive, infectious live performances, that have consistently drawn huge crowds – from their beginnings busking on the streets of The Six, to intimate club dates, and massive festival stages – the band will bring their hyper-engaging live show to The Legendary Horseshoe Tavern as they release the new album on Wednesday, July 6th. 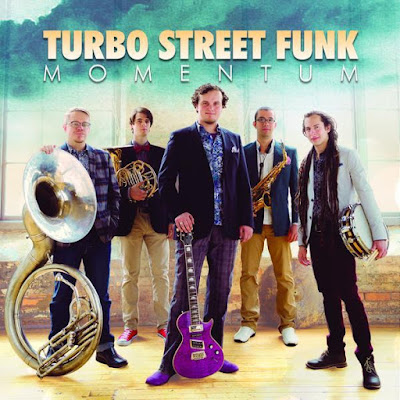 Momentum is a very apt name for the new Turbo Street Funk album: most of the self-penned songs encourage forward motion through our lives, and the recording captures the epic thrust and drive of their live show. Most of the players in the band are music school graduates and they’re all skillful, talented musicians, but it never gets in the way of their musical fun – or ours. If this album doesn’t make you want to smile, laugh, or dance, you might wanna check your vital signs. This is lease-breaking music at its best.

The title track "Momentum,” with its climactic chorus and stadium-friendly refrain, is an inspirational, feel-good anthem that lives up to the band’s turbo-charged name. 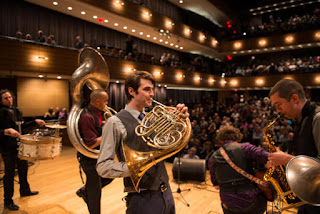 “If I Think Twice” finds ska and klezmer mixing it up in the alley with gypsy rock, with a surprisingly funky tuba, fun backing vocals and a crazy-ass guitar solo.

Although one of the songs is called “Never Been To New Orleans,” judging by the performance on this song, it sure sounds like they have. It showcases double-time tempo for the featured bluesy harmonica and sax solos, as well as the party finish, replete with growling horns and cheering crowd.

"Seven" – an instrumental mashup of The White Stripes' "Seven Nation Army," The Eurythmics' "Sweet Dreams (Are Made Of This)," and Grieg's "In The Hall of the Mountain King" – employs a ska rhythm to get to the funky soul of these classic, and classic-rock gems. It takes great verve and imagination to pull this inventive medley off, but Turbo Street Funk does.

Their cover of the Ghostbusters’ theme – perfectly timed to coincide with the blockbuster reboot movie of the summer of 2016 – rides an ultra-rhythmic beat and a wailing sax solo to end the album on a high. 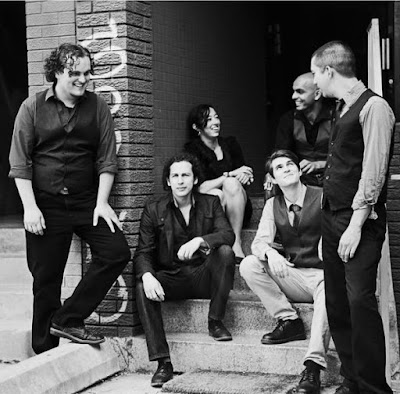 TURBO STREET FUNK perform "TO THE STREET" in Toronto, Ontario, Canada at the Beaches Jazz Festival "Street Fest" on July 23, 2015.