TORONTO…Toronto Summer Music launches two new after-party events during the 2016 festival:  Long Winter at the Elgin and Definitely Not The Proms.

Toronto Summer Music has partnered with Mike Haliechuk of Long Winter, the inter-arts festival, to create an epic after-opera event on July 22 starting at 10 PM.   Rumoured to be haunted, the lobbies of the historic Elgin and Winter Garden Theatres (189 Yonge Street) will be transformed by artists, musicians, and dancers for an eerily unforgettable, immersive, artistic experience.  Opera tickets purchased for The Rape of Lucretia include access to the Long Winter at the Elgin after-party.  Tickets to the after-party can be purchased separately online for $20.

On August 2 at 10 PM, Toronto Summer Music Festival hosts Definitely Not The Proms, an after-party featuring great music, wine and food at Integral House (194 Roxborough Drive, Rosedale).  Definitely Not The Proms features food by Michael Tong of Sublime Catering and performances by classically trained singer-songwriter-pianist Jeffery Straker who has recorded for CBC's Canada Live and has toured internationally as far as Peru, Chile and Mexico. "Rufus Wainwright and k.d. lang are among the Canadians making essential and beautiful music – add Jeffery Straker to that list,” writes The Chicago Free Press.  Tickets to Definitely Not The Proms are $75 (admission includes food and drink). 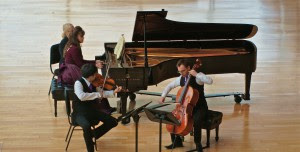 About the 2016 Toronto Summer Music Festival
From July 14 to August 7, the Toronto Summer Music Festival brings outstanding classical music experiences to the city with a program featuring renowned Canadian and international artists in 24 mainstage concerts at Koerner Hall, Walter Hall and the Winter Garden Theatre, plus masterclasses, free outreach concerts, lectures, and workshops.

The 2016 Festival theme, London Calling! celebrates the vast musical traditions of Great Britain – from the Baroque to the 20th century pop British Invasion – with a special focus on the music of great British composers including Elgar, Vaughan Williams, Britten, Walton, and many more.  Performances include pianists Jeremy Denk and Christopher O’Riley, mezzo-soprano Jamie Barton, the Parker and Dover String Quartets, and a semi-staged production of Benjamin Britten’s chamber opera The Rape of Lucretia by Against The Grain’s Artistic Director Joel Ivany.

For information on all 2016 Toronto Summer Music Festival activities call 416-408-0208 or visit www.torontosummermusic.com .