LONDON, ENGLAND - In the late 17th century the world was transfixed by the Baroque opulence of the recently built palace of Versailles, and it was around this model that architect Nicodemus Tessin the Younger based his designs for Sweden’s new royal palace, Kungliga Slottet.

An homage to the French royal seat, Kungliga Slottet was to be a heady mix of rigidly exuberant Baroque and florid Rococo curves. Built between 1700 and 1754, Tessin’s original plans did not come to pass as King Karl XII – the reigning monarch of the time – disliked many of the architect’s extraneous flourishes and made changes to the palace to make it more minimal.
Inspired by Kungliga Slottet’s transformation from decadent citadel into a temple to Scandinavian restraint, Tiger of Sweden’s Spring Summer ’17 collection consists of a tapestry of influences, ranging from the ornate to the understated.

A Baroque garden-inspired print adorns slick one-and-a-half breasted suits, bombers and windbreakers at the opening of the show, and bright bold stripes adorn blousons and wide leg trousers. Close-cut, clever takes on regency-style mourning suits are worn with nylon field jackets and smart poplin shirts, while baroque-print jacquard tunics come teamed with classic two piece suits. All these contrasts help to create a sense of intricacy and depth – a blend of old and new, minimal and maximal that feels, ultimately, contemporary.

Elsewhere, utilitarian zip-up field vests in monochromatic shades come worn over traditional cotton tailoring, while sheer jumpers are teamed with poplin shirts and high-shine nylon shirt jackets. Suits are worn with sneakers throughout, while cropped postman jackets look utilitarian and simple in contrast to the collection’s baggy, shortened and kick flared trousers. Above the knee tailored shorts teamed with pulled up white socks have a boyish charm.
A considered jumble of styles which comes together as a cohesive whole thanks to Tiger’s consistently sharp cut, this is a collection inspired by Sweden’s rich cultural history as much as it is Tiger’s contemporary attitude to the clothes it produces. Lush yet laconic, smart yet soft – and as desirable as ever. 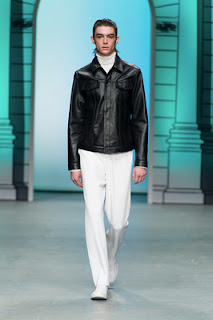 About Tiger of Sweden
Founded in Stockholm in 1903 as a men’s tailoring brand, Tiger of Sweden has grown over the past century to operate across three continents. Always focusing on their brand philosophy, ‘A Different Cut’, Tiger has grown to now offer complete men’s and women’s RTW lines, shoes, accessories, underwear and a dedicated Jeans line. Continuing to evolve under the directorship of CEO David Thunmarker, Tiger of Sweden offers a modern and contemporary approach to traditional tailoring. Since 1993, Tiger of Sweden has gone from an €1.5 million turnover to €126 million for the 2014–2015 fiscal year. Tiger of Sweden is sold and marketed in 20 countries and has been part of the IC Group A/S since 2003

All images courtesy of Tiger of Sweden