Schwerin, in the north of Germany on the Baltic Sea, is a bit of an off the beaten path destination for North American tourists. It's the city of seven lakes, green fields and the sandy shores of the Baltic Sea. With a population of only 100,000, Schwerin is Germany's smallest capital, seat of the Federal state Mecklenburg-Western Pomerania.
It enjoys a picture-perfect location among a series of lakes that reflect both the passing clouds in the northern sky and the city's most famous landmark, Schwerin Castle. It is a fitting landmark: light, airy, bright and welcoming – just like the city itself.

Records dating back as far as 965 AD show evidence of a castle built on a freshwater lake in what historians believe to be Schwerin. However, it was only after 1160 that the city was actually established and the castle rebuilt in the shape of the now eminent Schwerin Castle. The Romanesque cathedral, built in 1270, is another spectacular monument - the city's only medieval structure to survive the centuries.

Today, Schwerin is known by many names: city of the seven lakes, Florence of the North, cathedral city and royal seat. All are apt because Schwerin successfully combines nature and architecture, artworks great and small, plus reminders of its long history. As visitors cross the cobbled market square, explore the narrow lanes, admire the historical buildings in the central Schelfstadt quarter or let their gaze fall on the incredibly beautiful castle, they will soon realise that there is plenty to see and do in Schwerin.
The castle is the city's most famous landmark and perches on an island between Lake Schwerin and Lake Burgsee as if taken from the pages of a fairytale. In July, you can experience its native beauty, historical monuments - along with opera and fantastic outdoor eating.

• Find out more about the area 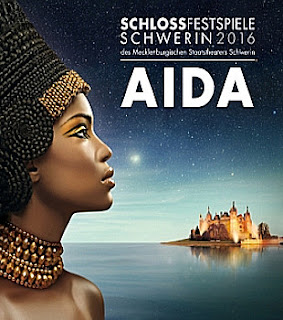 Castle Festival Schwerin July 8 to August 14, 2016
What began in 1993 as a secret among opera lovers, has now developed into an internationally renowned festival in front of the imposing backdrop of the fairytale castle of Schwerin. Nowadays, tens of thousands of guests flock to Schwerin each year for the summer productions of the Mecklenburg State Theatre.

Aida could hardly have a grander backdrop than the Schwerin Castle. The story: the Ethiopian princess Aida lives secretly in hostile Egypt as a slave at the court of the king's daughter Amneris. Aida loves Radames, an Egyptian commander, but Amneris has also fallen in love with the handsome soldier. Three lovers, in the midst of a raging war of violence and destruction. The Mecklenburg Staatskapelle Schwerin will present this musical masterpiece under the direction of Music Director Daniel Huppert.

The place
Against the magnificent backdrop of the fairytale-style castle, the Castle Festival Schwerin presents Verdi's opera Aidi. Under the starry sky above Schwerin in the Old Garden, powerful voices will bring Verdi's dramatic story to life. Audiences will have a unique view of the opera and the castle itself, which rises from the mirror-like waters of Lake Schwerin.

Opera Pampering Weekend
Experience an enjoyable cultural getaway with everything that goes with it and the best seats at the Castle Festival Schwerin - already
* 1 night - from 175€ per person.
* 2 nights - from 250€ per person.

• Check out tickets, information and the Opera Pampering Package at the link
Schwerin Gourmet Garden July 15 to 17, 2016
Welcome to Schwerin's biggest garden restaurant - an event that turns the castle garden pavilion into a giant al fresco dining and entertainment centre.

As part of the cultural and garden summer a lovely garden restaurant is set up in the historic castle park of Schwerin again. 16 exhibitors and participants have registered for this year. Brand new, the "Phillies - Bar" from Schwerin and representatives of the Dutch fishing industry. It is the first time the culinary offerings will include Dutch young herring, traditionally offered from carts by Dutch girls in historic costumes. 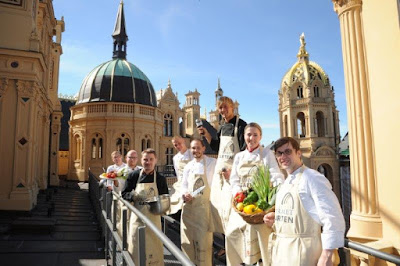 The Mecklenburgische Brauerei Lübz, Sparkasse and Henkel are again partners of the "Gourmet Garden". There are talks with the shrimp farm in Grevesmühlen, the only manufacturer in Germany of fresh shrimp (www.cara-royale.de). Negotiations are currently underway with the company "Güstrower Schlossquell" to win them as partners and sponsors of the event.

The options range from wine from Franconia with the "Summer Lust" in Boxbeutel, champagne & oysters to wild fruit brandy to pasta and wine. The traditional house "SN" is also back again and the "Dutch farm". The "ars vivendi" will convince you with Mediterranean delights. There is ice from the farmer and quiche, coffee and cakes, steaks & beer. The Kühlungsborner Gourmet day club will tempt with its gourmet chefs and critics.