• Here's a guide to all the Tre Bicchieri winners 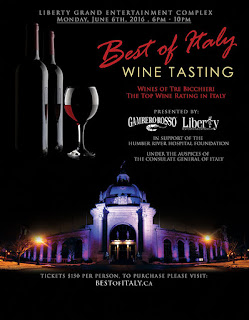 What could be more appetizing than a room full of Italian wines and foods to sample? Add the posh surroundings of the Liberty Grand complex at Exhibition Place, and the experience was nothing short of sublime.

3 Glasses is the top distinction awarded to some of Italy’s best wines by Gambero Rosso, an Italian journal that celebrates the hedonistic pursuit of food, wine & culture.

Every year in the Fall, Gambero Rosso announces their short-list of Tre Bicchieri winners (pronounced “tray bee-kee-AIR-ee”, which means “3 Glasses”). These are the wines that are judged as the best from a massive collection of 22,000 wine contenders from 2,400 Italian wineries. Taste testing 22,000 wines continues over a 6 month period.

This year just 421 wines earned the Tre Bicchieri distinction. That’s the top 2% of all wines taste-tested.

Luckily, I got to check out the Gambero Rosso road show when it hit Toronto this week. There was tiramisu, meat balls, polenta and osso bucco, cheeses, salads and did I mention tiramisu...? There was organic fair trade, single origin, richly aromatic coffee from  Caffè Paranà.

And the wines? I can only comment on a few that I sampled, very inexpertly - and in no way to besmirch the good name of the very many that I couldn't get to.

From La Guardiense, a winery in the Campania region in the south of Italy - the Sannio Aglianico Janare '14. This is a lovely, big, fruity dark red with a nice finish, not too tart and perfect for sipping.

Just released in Vintages (the LCBO store) it's a perfect summer wine - fruity and fragrant. It would be lovely for sipping or with light summer dishes. 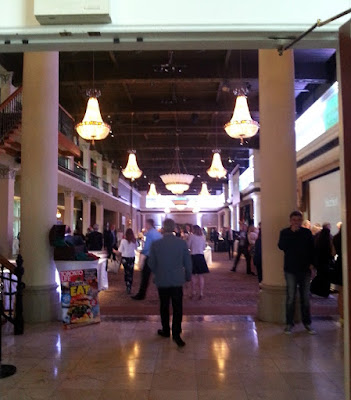 Cantina Nals Margreid - Pino Bianco Sirmian '14. Made in the Alto Adige or South Tyrol region of Italy, this white wine has a bright acidity that fills the nose, with light citrus notes from grapes grown 1200 meteres high on the slopes of the Tyrolean mountains. It's a nice sipping wine with fruit or cheese or perhaps accompanied by fish and seafood.

From Tuscany, I checked out a classic Chianti '13 from Badia A Coltibuono. The Badia A Coltibuono itself is a fascinating place centered around an 11th century monastery that has evolved into the burgeoning agritourist area. The Chianti '13 was fruity, with dark notes of cherry; it would go with any Italian dish I could conceive of.

From the Emilia Romagna region, I tasted the lovely Cleto Chiarli Tenue Agricole Rose Brut De Noir. It was nicely effervescent, with a light acidity. I could sip this wine with fruit and cheese for days on end.

Since I was on to bubblies, I finished with Bartolomiol - Voldobbiandene Brut Priot '14. It has a lovely and light taste with subtle peachy notes for a nice alternative to Champagne. 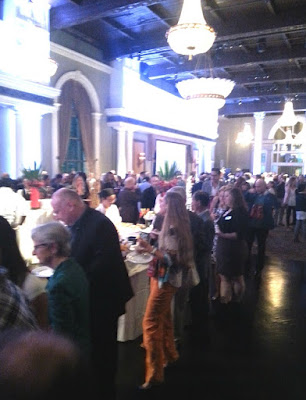 Bitters
I regret I didn't get to all of those lovely bitters and liqueurs, but at least I got to a few.

Fernet-Branca Amer/Bitters
If you like bitters - and I do! - you'll have to try Fernet-Branca Amer. It's the perfect digestif, wonderfully aromatic with a variety of spices and herbs, made in Milan, Italy by Frateli Branca Distilleries.

I found it light and flavourful, delicious on its own or over ice. It's made with 27 different herbs from 4 continents - including aloe ferox, gentian, chamomile, chincon, colombo root, Chinese rhubarb, myrrh, peppermint, saffron and ireos - and then aged in oak barrels for 12 months for a taste that's light, mot syrupy, with just the right bitter edge.

Amaro Lucano
Amaro Lucano is an Italian liqueur made by Amaro Lucano S.p.A., a family-owned company founded in 1894 and based in Pisticci, Basilicata. The liqueur is made using a secret recipe that uses wormwood, Roman wormwood, clary sage, musk yarrow, sweet orange and gentian, among others. Nice with ice or on its own, Amaro Lucano was made for mixing in cocktails too.

(Chinotto is an Italian soft drink made with the juice of the fruit of the myrtle-leaved orange tree.)

Pour everything into a tall glass and stir with a straw and add the splash of orange juice last. Garnish with an orange slice.