• Buy the book in digital or paperback on Amazon


Kwame Stephens is a Ghanaian/Canadian writer and this collection of ten stories set in his native Ghana. The first two stories were published in English Speaking Africa in the mid 1980's when Kwame began his writing career while the rest are more recent. Taken together, the collection covers a broad swath of contemporary African life from the crowded buses to a busy restaurant in Accra. 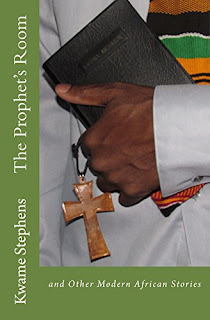 Kwame's style is straightforward and focuses on action and character. Like his writing style, the characters are fairly straightforward and not given to indulging in a lot of introspection. Instead, Kwame focuses on the actions and details that flesh out their lives and the Ghanaian landscape of rural and city life. There are female characters but these are largely the stories of men and the male gaze.

Collectively, the stories bring the complex fabric of modern African life to light. The characters navigate between Christianity and older African religions, between ex-patriots and those left behind. Christianity is a strong theme, with faith as something that can be well or badly placed. Christianity is a disappointment in The Road to Accra, the element that won't magically help you get the job, but offers hope in The Shadow of Death.

Some of the elements play out in terms of tensions and resolutions, There are ethnic tensions between Christians and Muslims. There are the inevitable tensions between ex-patriot Africans in a new way of life and those who stayed behind are revealed in Letters to Kasoa.

The stories touch on family life - the reverence for family as well as the sometimes callous indifference of those close to us. Other Duties is something of a morality fable about the boss's son and An Honourable Gentleman deals with an ostentatious businessman who beats his wife. The Prophet's Room, the titular story, deals with the realities of village life without passing judgement.
The last story is an excerpt from a soon to be released novel, an opening that sets up a romance brewing between a Ghanaian business woman and a Kenyan worker. The novel, Abena's Loves, is based on stageplay.

Plots don't follow a traditional arc of conflict and resolution - they are more slice of life tableaux that should be read together to follow the characters from funerals to family gatherings, restaurants to road trips in a modern African landscape.
african writer book review contemporary african literature short story collection