• Book at the link

Inverness, NS (July 28, 2016) – Cabot Links Golf Resort has officially been named the top golf course in the country following the release of SCOREGolf’s TOP 100 Ranking this past Friday.
In its first year of eligibility Cabot Cliffs stole the coveted number one position, becoming the fifth course in the history of the Ranking to hold this title and the first to debut in the top spot. Sister course Cabot Links also placed within the top five in the country, with a ranking of fourth in Canada. Both courses belong to the Cabot Links Golf Resort located on the west coast of Cape Breton Island in Nova Scotia.

The resort’s Managing Partner Ben Cowan-Dewar says his team is thrilled with the ranking and is not taking it for granted.

“It’s such an amazing honour and a celebration of all the people who have worked very hard to make this happen,” says Cowan-Dewar. “It’s certainly a tribute to our architect team Bill Coore and Ben Crenshaw who continually prove themselves as the very best in the business globally, but also to all our employees and the Cape Breton Community as a whole.” 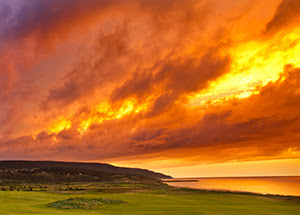 Cabot Cliffs and Cabot Links also ranked in the World Top 100 by Golf Digest earlier this year, with Cliffs debuting as 19 in the world.

Course architect Bill Coore says Cabot Cliffs was a very special project, “Ben and I, along with our entire team, are honoured by this award. It is really a celebration of the Cape Breton landscape, which we were so fortunate to have as a canvas”

The SCOREGolf ranking, which takes place every two years and is judged by a panel of over 90 golf experts, was first published in 1988 and is known as the most comprehensive ranking in Canada. Each course is evaluated on beauty, strategy, challenge, design, par 3s, par 4s, par 5s, conditioning and fun. The goal of the Top 100 is to compile a listing of the very best courses in Canada, public or private.
Accommodations
Designed by award-winning Nova Scotia architect, Susan Fitzgerald and celebrated interior designer, Alexandra Angle, the 72-room Cabot Links Lodge is inspired by its surroundings. The building incorporates local materials, such as cedar and heavy timber, which combined with a timeless and modern aesthetic are the epitome of low key luxury. The Lodge is located in close proximity to the Pro Shop, the Cabot Bar and Panorama Restaurant, fanning south to border the putting green.

The 2-bedroom and 4-bedroom Golf Villas at Cabot Links, designed by Omar Gandhi Architect, offer an upscale accommodation option with modern influences and high-end amenities, set against a picturesque backdrop of breathtaking ocean and golf views. 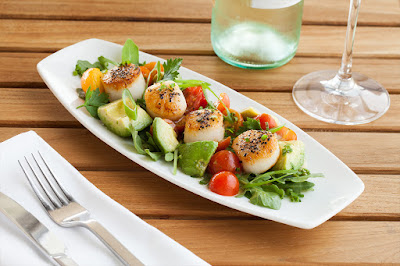 Dining
There are three onsite dining options from the stunning Panorama Restaurant with its unbroken view of the surrounding area and an upscale meanu, the Cabot Bar with a diverse menu focusing on locally caught seafood, game and fresh salads, the Cabot Public House with a menu of pizza and pub fare along with local craft beers. The Downstreet Coffee Company is a few minutes walk on Central Avenue in Inverness.

The Glenora Distillery
North America’s first, and still Canada’s only single malt whisky, Glenora Distillers is based in Glenville, a gaelic community just a short drive south of Cabot Links.  Their most prominent product is the Glen Breton Rare, a 15 year old Scottish-style single malt that holds its own against some of the best in the world.  Book a tour and explore this amazing piece of Cape Breton history.  Travel: 15 minutes
Inverness Beach
Blessed with a stretch of sand two miles long, an ocean with the warmest waters north of the Carolinas and the spectacular sunsets that Inverness is known for, this stunning geography is, in large part, the reason many of our guests return again and again.  At Cabot, when we’re not on the golf course, we love nothing more than to spend those beautiful Cape Breton summer days on the beach.  If you’re heading down that way, we would be happy to help with transportation, beach activities or whip up a great picnic of your choice.  With the warm waters of the Gulf of St Lawrence, ideal summer weather and a lifeguard on duty during the day, the Inverness beach is a popular spot for both guests and locals alike. 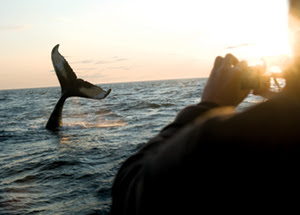 Whale Watching
Located a short drive away in Pleasant Bay, you can experience some of the best whale watching grounds on the Cabot Trail, on board a 42-foot cabin cruiser.  Dolphin, seal, seabird, raptor and bear sightings are also a common occurrence. All equipment is provided, including, rain suit and hydrophones to hear the whales. Other scenic highlights of the tour include unique cliff formations, sea caves, pioneer settlements and waterfalls.

For the more adventurous, zodiac vessels are known for providing close encounters. Both options offer sightings of various marine wildlife and spectacular coastal views of Cape Breton Highlands National Park. A tour with Captain Mark is a must for eco-tourists and photographers.  This trip is also available out of the Harbour in Inverness.  Peak times for whale watching is June through September. Travel: one hour each way   Duration: 2 hours
Also nearby/available: