Katonah, NY, July 26, 2016 — The Katonah Museum of Art (KMA) in partnership with sherry b dessert studio of Chappaqua, NY, announces a public art commission by New York City-based artist, Keiran Brennan H­inton. The commission, a public mural, is a civically minded initiative organized by the KMA and sherry b dessert studio aimed at enriching communities beyond the Museum’s walls while empowering artists as agents of change. Situated on an outside wall of 65 King Street in Chappaqua, the mural will portray one of artist’s signature enigmatic interior spaces. Works by Brennan Hinton are currently on view at the Katonah Museum of Art as part of the exhibition, OnSite Katonah (through October 2).
Built in 1929 as a department store, 65 King Street fell into disrepair and was left vacant for several years before being acquired by sherry b dessert studio in 2010. The addition of a visual art feature on the exterior wall has long been envisioned by Sherry and Jeff Blockinger, owners of sherry b dessert studio, as the final touch to the building’s extensive renovation and revitalization. Painting began mid-July with the completed artwork to be unveiled at a public reception on September 17. During installation, paintings by Brennan Hinton will be on view at sherry b dessert studio, which will also host two events that explore the creative process -- an art-making workshop for children on August 2, and a panel discussion for adults in September. (See RELATED EVENTS for detailed information.)

Darsie Alexander, Executive Director of the KMA, says, “We are thrilled to partner with a local business to commission the artist’s largest project to date and to insert Keiran’s mural into the everyday life of Chappaqua residents. Facilitating unexpected encounters with artwork sparks just the type of social engagement that the KMA seeks to foster among neighbors both inside and outside of traditional museum walls.”

Sherry Blockinger, Executive Pastry Chef, owner of sherry b dessert studio, and a member of the KMA Board of Trustees added, “We are passionate believers in the important role that art plays in our community and in how exposure to the creative process enhances our capacity for imaginative thinking in our daily lives.  We felt confident in approaching the KMA as a valuable partner in bringing this project to fruition.”

Paint and supplies for the mural have been generously donated by Chappaqua Paint and Hardware.

KEIRAN BRENNAN HINTON
Keiran Brennan Hinton is a native of Toronto who now lives and works in New York City, NY. Brennan Hinton received his MFA in Painting from Yale, and his BFA from Pratt Institute, in Brooklyn NY. With oil paint and canvas, Brennan Hinton creates nuanced meditations on the ways in which we experience the human-built spaces around us. His compositions depict domestic interiors that, in their balance of familiarity and ambiguity, speak to the psychological weight architecture carries. With a range of bright, muted, and dark colors, the paintings reveal their complexity slowly, over a period of sustained looking. Brennan Hinton’s domestic scenes appear to shift under our vision — moving from precisely rendered to entirely abstract and back again. These works suggest the ways in which such experiences stick in our memory — particular details intertwined with intellectual and emotional impressions.

Recent group exhibitions include Onsite Katonah at the Katonah Museum of Art, Mercury Rising at Mulherin New York, and Large Works at FRONT Art Space. The artist has been awarded the Gloucester Painting Prize and Residency, the Yale International Student Scholarship, Outstanding Merit in Painting from Pratt Institute, and a Presidential Scholarship from Pratt Institute.

Keiran Brennan Hinton may be known as a painter, but before any paint touches the canvas, he starts by sketching his ideas on pencil and paper. Children ages 6-12 are invited to join Brennan Hinton for a “process workshop” led by the artist and educators from the Katonah Museum of Art.

Elizabeth Rooklidge, Associate Curator at the Katonah Museum of Art, moderates a panel discussion exploring parallels in the creative process between Keiran Brennan Hinton’s practice as a visual artist and Sherry Blockinger as a pastry chef. A reception with the artists will immediately follow the panel discussion.

ABOUT THE KATONAH MUSEUM OF ART:
The Katonah Museum of Art, through innovative exhibition and education programs, promotes the understanding and enjoyment of the visual arts for diverse audiences. The Museum presents exhibitions that explore ideas about art, culture, and society — past and present.

CURRENT EXHIBITIONS:
OnSite Katonah
July 10 - October 2, 2016
OnSite Katonah presents eight experimental, site-specific installations created in response to the Katonah Museum of Art’s distinctive landscape, architecture, and history. With projects boldly immersive and keenly subtle, artists investigate and reimagine every facet of the KMA’s location. Installations occupy the light-filled Sally and Volney Righter and Mary L. Beitzel Galleries; the Marilyn M. Simpson Sculpture Garden, with its towering Norwegian spruce trees; and the sloping greens of the Front and South lawns. These artistic interventions into its site transform the Museum’s physical space — which so deeply impacts the KMA’s institutional identity — into a platform for creative experimentation. 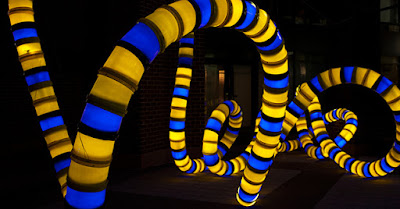 Victoria Fu, Egg
July 10 - October 2, 2016
Los Angeles-based artist Victoria Fu employs analogue and digital techniques to explore the impact of virtual aesthetics on the everyday human experience. While Fu typically works in film, light-projection, and photography, for the KMA she has created a site-specific building wrap, covering the Museum's front façade with one of her enigmatic, unexpected images. Fu's work was featured in the 2014 Whitney Biennial and she is a recipient of the prestigious 2015 Guggenheim Foundation Fellowship. Egg will mark the artist's first solo project on such a monumental scale.
The Katonah Museum of Art is located at 134 Jay Street, Katonah, NY 10536. Museum hours are: Tuesday through Saturday from 10am - 5pm, Sunday from 12pm - 5pm, closed Monday. General admission: $10 adults, $5 seniors & students. Members & children under the age of 12 always enter free. For more information, please call (914) 232-9555 or visit www.katonahmuseum.org.