• Find out more & Buy/Pre-order the book

It's maybe one of the most universal dreams shared by nearly all human beings - to view earth from space.
I’d like to introduce you to the next book PSG is releasing, Spaceborne, by active NASA astronaut and photographer Donald R. Pettit with a foreword by Alan Bean, member of Apollo 12 and the 4th man to walk on the moon.
Pettit has lived in space - worked and walked in space. During his 370 days aboard the International Space Station, Pettit created a unique portfolio of fascinating photographs of the earth, the stars, and everything in between.
The spirit of exploration runs deep in so many of us. To see what's "over there" or "around the next corner"...to discover exotic new lands and, even new worlds, has lead people to do extraordinary things. For astronaut Donald R. Pettit it has propelled him to spend 370 days aboard the International Space Station.
Being afforded that rare privilege of viewing earth from space was not lost on Mr. Pettit. Feeling a strong sense of duty to share what he witnessed, he was inspired to use his talents as a photographer to create an amazing array of worldly and other-worldly images of earth, the stars, the auroras and everything in between. Many of the best of those photographs are included in this museum quality, hardcover, coffee table book.
The foreword is by Alan Bean. Mr. Bean is widely known for his artwork depicting various space-related scenes and documenting his own experiences in space as well as those of his fellow Apollo program astronauts. In November, 1969, aboard Apollo 12, Bean became the fourth person to walk on the Moon. He made his final flight into space on the Skylab 3 mission in 1973. After retiring from NASA in 1981, he pursued his passion for painting full time.
“Art is woven into the fabric of space, and we will only fully sense its forms by venturing there. Astronauts are privileged to be the explorers of this age, and I believe we should share our experiences with everyone on earth.” - Donald R. Pettit.
Excerpt: The history of spaceborne photography has been colored, too, by tragedy. On February 1, 2003, I was on the International Space Station as a member of the Expedition 6 crew. That was the day the Space Shuttle Columbia, STS-107 burned up during its return to Earth. All seven astronauts aboard perished. U.S. space shuttles remained grounded for more than two years while the accident was investigated and NASA engineers fixed the problem. The Expedition 6 mission was extended to nearly six months, and we returned to Earth on our Russian Soyuz spacecraft. The Soyuz also suffered a minor malfunction during entry, causing us to ballistically return. Basically we became a person-packed meteorite, and missed our intended landing site by 300 miles. 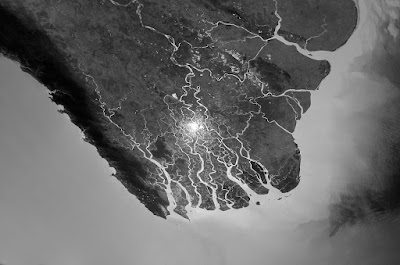