DUFFTOWN (SCOTLAND) - Since its inception in 2002 our programme has seen The Glenfiddich Distillery play host to one hundred and twenty artists from around the globe. Each artist spends three months in residence to be inspired by the unique environment Glenfiddich offers. 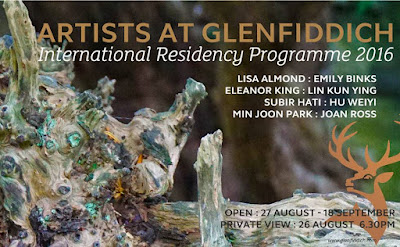 This summer, once again, Glenfiddich has invited eight visual artists to live and work together in the heart of Speyside. Each one creates works of art in reaction to their new surroundings and as a reflection of their experiences. This opening, the second of our 2016 summer exhibition schedule, will provide an opportunity for four of this year’s residents to display the art they have been working on over the past few weeks.

Eleanor King is the twelfth Canadian artist to participate in our programme and has spent her summer at Glenfiddich attempting to live using only technologies and materials that would have been available in the year 1900. She describes her summer project, known as the FUTURE PAST, as being a complex and ridiculous performance concerned with modernisation, technology and time. Yet it is not a romantic retreat into the past but rather an earnest attempt to re-learn traditions and imagine sustainable and utopian futures.

Imagination and reality are brought together in the skilfully executed drawings of Korean artist Min Joon Park whose thoughtful observations of life at Glenfiddich have been captured in a number of delicate pencil and ink works and bound together in to a series of dream like illustrations heavily influenced by his appreciation of great artists such as Di Vinci.

For Emily Binks, the second resident artist to be selected through Glenfiddich’s collaboration with the New Contemporaries Exhibition the past weeks have been spent collecting unwanted sofas to be brought together into a sculptural installation inspired by mountain bothies and rudimentary shelters.

Also in a final flourish before she heads back to Australia Joan Ross has brought together an eclectic range of materials from expanded foam and polystyrene to fur from red deer and kangaroo to create a collection of frivolity that also critiques capitalism and consumerism, drawing on the kitsch side of Scottish tourism.

Finally Ross and Binks have also come together to create a collaborative work celebrating their combined love of Hi Vis Fluoro colours, with an external installation that is inspired by the scarecrows they have observed protecting the highlands.


A private view will be held on the evening of Friday 26th August. The exhibition is then open to the public from Saturday 27th August until Sunday 18th September.