Prophets of Rage
The Party's Over Drops Today

Prophets Of Rage combines the sonic firepower of Rage Against The Machine, Public Enemy and Cypress Hill in a supergroup - compelled to rise up again during this year of fractious electioneering.

We can no longer stand on the sidelines of history.
Dangerous times demand dangerous songs.
It's time to take the power back. 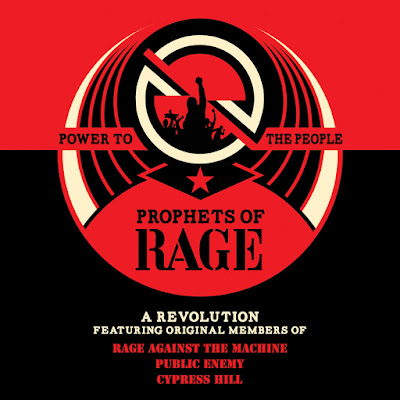 MAKE AMERICA RAGE AGAIN TOUR
With Special Guests
TICKETS START AT $20.
The tour with AWOLNATION opening officially kicked off on August 19, running through October 16. A portion of the proceeds from each Prophets Of Rage concert will benefit a local charity that works to help the homeless and the hungry.

The tour began with a couple of shows in July, first a free show in Los Angeles' Skid Row and then a "guerrilla performance" a couple of miles away from the Republican National Convention as it unfolded in Cleveland. A new single, also called "Prophets of Rage," was released just before the gig.

Last night, they hit Toronto and Dave Grohl jumped on stage to add to an already powerful performance.