The Americanos 'Set Me Free' Ft. Nile Rodgers & Herizen Guardiola Lead Single From Baz Luhrmann & Nas' 'The Get Down'

The Americanos Set Me Free
Ft. Nile Rodgers & Herizen Guardiola
Lead Single From Baz Luhrmann & Nas' The Get Down 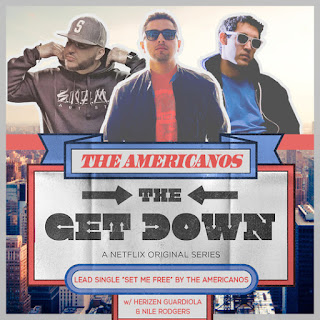 On the heels of  their critically acclaimed single featuring Ty Dolla $ign, French Montana and Lil Yachty, “In My Foreign”, Los Angeles-based music collective The Americanos (Louie Rubio, Alexander Shultz and James Corrine) are very excited to share their new single for one of streaming television’s most hotly anticipated shows to date - The Get Down. Co-produced by Baz Luhrmann and Nas,The Americanos' new production "Set Me Free" (ft. Nile Rodgers) with Herizen Guardiola as Mylene Cruz on the show, is featured in the series trailer, and lands digitally today. Highlighted by Herizen Guardiola’s rich vocal stylings and and Nile Rodgers on guitar, the track builds to a genre-bending soundscape that illustrates a very personal sentiment. The group comments:


"When Baz Lurhman came to us to work on one of the most important hit songs in 'The Get Down' we were honored. He needed a huge dance anthem that could seamlessly combine Gospel, Afro-Latin, Disco, and Hip Hop, and so "Set Me Free" was created. Baz loved the track so much he ended up extending certain parts of the song so he could use it as much as possible in the show. We're a DJ group with a crazy vinyl collection but we're also multi-instrumentalists and big Baz fans so this was a perfect fit for us."

Baz Luhrmann, director of Moulin Rouge, The Great Gatsby, Romeo + Juliet and Strictly Ballroom, says of the project: "This is living history. The forefathers of it are actually living… There have been times when I haven't known if I could do this. I haven't had a break of any kind in two years. It is constant and relentless."
In addition to The Americanos, The Get Down features original music and onscreen appearances by the likes of Grandmaster Flash, Jaden Smith, Christina Aguilera, Donna Summer, Nile Rodgers, Teddy Pendergrass, Leon Bridges, Janelle Monáe and up-and-coming young actors Herizen Guardiola, Justice Smith, Shameik Moore, and Yahya Abdul-Mateen. The series is the debut TV effort of Baz Luhrmann, and highlights the era of disco, hip-hop and soul set in South Bronx in the late ‘70s."The Get Down" is debuted as a Netflix Original TV Series via the online streaming service on August 12, 2016.

• More about the series