Off Broadway Ticket Deal: Nat Turner in Jerusalem $25 thru October 16 2016 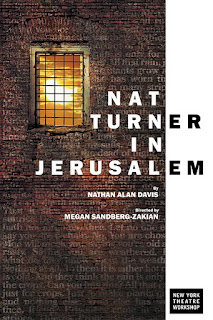 In 1831, Nat Turner led a slave uprising that shook the conscience of the nation. Turner's startling account of his prophecy and the insurrection was recorded and published by attorney Thomas R. Gray. Woven with vivid imagery and indelible lyricism, NYTW 2005 Fellow Nathan Alan Davis makes his New York debut with this timely new play that imagines Turner’s final night in a jail cell in Jerusalem, Virginia, as he is revisited by Gray and they reckon with what has passed and what the dawn will bring.

Nat Turner in Jerusalem examines the power of an individual's resolute convictions and their seismic reverberations through time. Megan Sandberg-Zakian (The Convert) directs a cast including Phillip James Brannon (Bootycandy) and Rowan Vickers (The Sensuality Party).