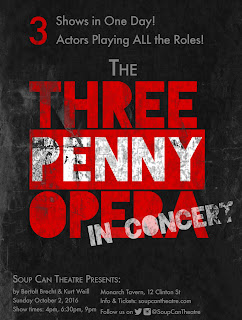 TORONTO - Soup Can Theatre is kicking off the month of Halloween with our favourite musical and the inspiration for our Toronto Fringe hits Love is a Poverty You Can Sell I and II: an in-concert version of THE THREEPENNY OPERA - a dark play with music full of crime, greed, lust, dark humour, and biting social commentary that chronicles the exploits of antiheroic criminal Macheath (aka ‘Mack the Knife’) against the backdrop of 19th century London's seedy underworld. With a haunting score and message, THE THREEPENNY OPERA is Kurt Weill and Bertolt Brecht's most famous collaboration from the Weimar Era.

To put a spin on things, there will be 3 PERFORMANCES in ONE DAY! Sunday October 2nd at 4pm, 6:30pm, and 9pm at the historic Monarch Tavern in the heart of Little Italy. In addition, just 3 PERFORMERS will be playing ALL the roles: Scott Garland (2016 Dora Award Nominee for Three Men in a Boat), Christian Jeffries (from our Love is a Poverty You Can Sell cabarets), and Sarah Thorpe (Soup Can co-founder, MyTheatre's 2015 Fan Favourite Award winner for Heretic), under the baton of our musical director Pratik Gandhi (music director of the Rouge River Winds and resident conductor at Toy Piano Composers), who helmed the music on our productions of Circle Jerk, A Hand of Bridge, Marat/Sade, and Love is a Poverty You Can Sell I and II. 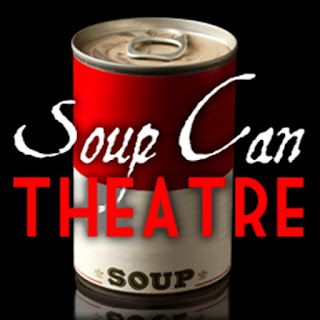