The traditional Afro-Brazilian berimbau is a disarmingly simple instrument: a single steel string, a wooden bow, a resonating gourd. But on MeiaMeia, the berimbau is literally reinvented. Thanks to custom tuneable instruments expertly hand-crafted by David “Snappy” White, composers Gregory Beyer and Alexis C. Lamb and the dedicated talent of ensemble Projeto Arcomusical take the berimbau to new heights of collaboration, interplay and communication. 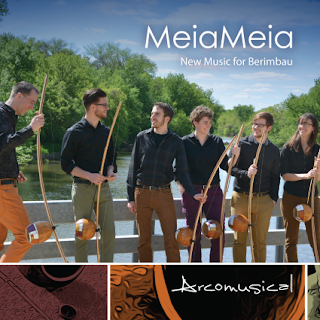 In the spring of 2013, Beyer and Lamb began working together in an independent study under the auspices of the Undergraduate Artistry and Research Apprenticeship Program at Northern Illinois University. Lamb’s first composition for berimbau, “Descobertas por pau e pedra,” was such a success that the collaboration continued, resulting in a plan to compose an expanding chamber music cycle.

MeiaMeia – which in Portuguese means “half-half” as in “six of one, a half dozen of the other” – is that cycle, a dozen pieces written in Beyer and Lamb’s rich and sophisticated language for everything from a solo instrument to a sextet. Performed by Projeto Arcomusical, the music is fresh, playful, rhythmic, colorful and soulful. Drawing on influences from ambulances in Rome to traditional capoeira to palindromes to numerical patterns to contemporary artists like Imogen Heap and the XX, Beyer and Lamb explore a rich and diverse, intricately bouncy and resonant vocabulary.

Beyer began working with the berimbau in 1999 and has since become a recognized pioneer of the instrument. Projeto Arcomusical has come a long way since its student roots: a fully professional group of excellent musicians capable of performing chamber music of the highest caliber. Such excellence is immediately evident when listening to MeiaMeia.