Jazz in Miniature: Super Petite by The Claudia Quintet

Short doesn’t necessarily mean simple. Drummer-composer John Hollenbeck acrobatically explores the dichotomy between brevity and complexity on Super Petite, the eighth release by the critically-acclaimed, proudly eccentric Claudia Quintet. The oxymoronic title of the new album, captures the essence of its ten new compositions, which pack all of the wit and virtuosity that listeners have come to expect from the Claudia Quintet into a shorter time-frame. 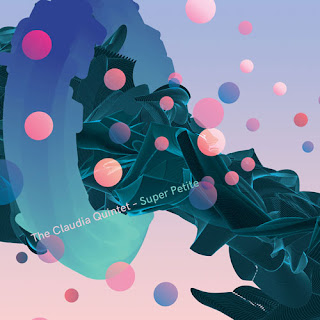 The Claudia Quintet has walked a unique path in contemporary jazz since their founding in the late 1990s. Unlike most jazz ensembles where the particular musicians may come and go, drummer, composer and leader John Hollenbeck always wanted Claudia to be a ‘band’ with a sound not only determined by the compositions and the instrumentation, but with the actual players who perform the music. This concept is why Claudia has had an immediately identifiable sound since its inception. In that sound, the exceptional artistry and individuality of each musician is skillfully revealed throughout Hollenbeck’s original compositions.

Hollenbeck’s uncategorizable music – which bridges the worlds of modern jazz and new music in surprising and inventive ways - is realized by Claudia’s longstanding line-up. Over the course of 19 years and 8 albums, the band has forged an astounding chemistry and become expert at juggling mind-boggling dexterity with inviting emotion and spirit.

The concept of shorter works was both a personal challenge for Hollenbeck as a composer always dealing with a wealth of ideas, but also a reaction to a tendency in modern music toward the epic. “I’m feeling things in the opposite direction,” the composer explains. “When tunes are longer, there tend to be moments when not a whole lot is happening. If you have a really short tune, the whole thing has to be compelling.”

Equally compelling, the release comes with a fat, 20 page color booklet, designed by KarlssonWilker, who have done all of the artwork for Claudia's releases, which is filled with unusual and attractive art.

The Claudia Quintet
Formed by composer / drummer / arranger John Hollenbeck in 1997, this NYC ensemble’s sound explores the edge without alienating the mainstream, proving that genre-defying music can be for everyone. Over the past decade, the group has released CDs that are critically acclaimed world wide and whose appeal extends well beyond, as well as including traditional jazz audiences. The Claudia Quintet has amazed audiences from Alabama to the Amazon. Their unique sound has inspired dancing hippie girls at a New Mexico noise festival, the avant-garde cognoscenti in the concert halls of Vienna and Sao Paolo, and a generation of young musicians worldwide. In the course of the thousands of miles they have traveled together and hundreds of concerts they’ve played, the Claudia Quintet has evolved and grown, developing a dynamic live sound based on trust and spontaneity. They bring this powerful energy into the studio, where they record the old-fashioned way, live, playing as a band.

The Claudia Quintet’s album Super Petite on Cuneiform Records is on the ballot for GRAMMY consideration in the category: "the bestest post-jazz album with accordion and vibes” or something like that!...along with the instrumental composition "Peterborough" from the same album, composed by John Hollenbeck. Remember to vote by November 4!