#TravelJapan: Off the beaten path and into Japan's traditions and history in Matsusaka, Mie

#TravelJapan
Off the beaten path and into Japan's traditions and history
Matsusaka, Mie

Matsusaka, in Mie, is located on Ise Bay, east of Tokyo in the central part of Japan. Close to Kyoto and Osaka, Matsusaka is often overlooked by the tourist trade, and in fact many tourist guides to Japan will omit the small city in the Mie Prefecture entirely. But, it's a gem of Japanese traditional culture, with history, traditional textiles, and quite possibly the world's best beef, on offer.
Edo Period gem
It was the trade in indigo-dyed cotton in a striped pattern that actually originates in Vietnam that fueled Matsusaka's most prosperous era during the Edo Period (1600-1868). Local merchants grew rich off the proceeds, including Mitsui Takatoshi – founder of the Mitsui group. Matsusaka’s historic Izawa district is a showcase for Edo era architecture, including the Takegawa merchant estate and its exquisite tea house; contact the Matsusaka Tourism Assocation (info@matsusaka-kanko.com) to make arrangements.

• Shopping tip: In addition to the enchanting historic architecture, Matsusaka is home to a plethora of traditional Japanese sweet shops. It's not indulgence – you're appreciating Japanese culture.

On the approach to the castle is the old merchant area of the city with many traditional, wooden shops still selling indigo cotton goods. The former residence of Sheizawemon Odzu has been preserved as the Memorial Museum of Matsusaka Merchant (Tel: 0598 21 4331; admission 200 yen). The two-storey house has splendid tatami rooms, peaceful pocket-sized gardens, two thick-walled storehouses and a beautiful step- (kaidan) tansu under the stairs. The well, money-boxes, kitchen and toilets are still in place and the museum really evokes the atmosphere of an Edo-era business.
Matsusaka-jō (Matsusaka Castle) dates from 1588, and was constructed by daimyo Ujisato Gamo -- a noted man of culture who later converted to Christianity. Originally the castle's keep (donjon) had three storeys and a separate armory. Today, all that remains are crumbling stone walls and a uniquely beautiful atmosphere. 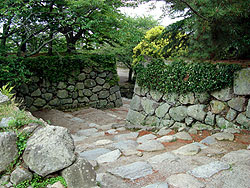 There is a park and garden to enjoy among the scenic ruins that overlook the city, which includes the foundation along with ruined stairways and stone walls. In the spring, the garden is a lovely enclave filled with cherry blossoms and wisteria. Below the castle walls is the Gojoban-Yashiki Residence (Castle Guards' Houses; Tel: 0598 26 5174) where the samurai guards of the castle and their extended families used to live. The impressive rows of 19 wooden houses are still inhabited today; six of them are occupied by direct descendants of the original soldiers.
Poetry lovers alert: This is where you'll find the Motoori Norinaga Memorial Museum (Tel: 0598 21 0312; admission 300 yen) and the Suzunoya (House of Bells) - a restoration of the poet's house and study and called after Motoori Norinaga's epistolary name. Motoori Norinaga (1730-1801) became the leading scholar of his generation and the museum houses the 44 volume "Kojiki den" - a manual of Japan's oldest history book that took Motoori 35 years to complete. Browse the diaries, hand-drawn maps, medical paraphernalia and artworks of prolific scholar Motoori Norinaga at the museum dedicated to his life (norinagakinenkan.com).
Just next door, the Museum of History & Folklore (Tel: 0598 23 2381; admission 100 yen) has a quirky collection of early stereos, radios and electrical appliances as well as indigo cotton looms - indigo cotton production has been a major industry of the area for centuries.

In the same area, the Hasegawa estate is the former home of a rich cotton merchant of the Edo era. The estate features historic architecture such as wooden lattices, five stores houses, and a roof supported by a distinctive udatsu beam—one of only three remaining in Mie Prefecture. The estate centres around a pond and lush greenery.
Matsusaka Cotton / Matsusaka Momen
Matsusaka, in Mie Prefecture, is famous for “Matsusaka Momen”, an Indigo-dyed cotton with a distinctive striped pattern. Records of cotton-weaving in Matsusaka go back as far as the 5th century and the area is famous for the high quality of its fabric. To this day, Kabuki actors still wear Kimono made of Matsusaka Momen and the manufacturing process is regarded as a national treasure. You ca buy bags, scarves, kimonos and more and try your hand at weaving the cotton at the Matsusaka Cotton Weaving Center (Tel: 0598 26 6355).
Matsusake Beef
Along with Kobe beef and Ōmi beef or Yonezawa beef, Matsusaka beef is considered the finest in Japan. Also known as Kuroge Washu or "Japanese Black" beef, the cattle are raised in the bucolic countryside that lies between the Miyagawa and Kumozu Rivers. Only the female cows are raised in this way, fed grains and fodder, and if they lack appetite, they're fed beer. The cows also get regular massages. If you're a concerned carnivore, it seems like a decent choice. 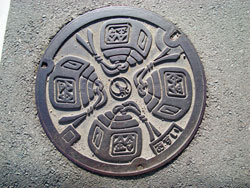 Japanese film buff alert: On the other side of town from the castle and merchant area is the interesting Ozu Yasujiro Seishunkan Museum (Tel: 0598 22 2660) dedicated to the famous film director, who spent his youth here in rural Mie Prefecture. Ozu Yasujiro, is best known for his classic film Tokyo Story (1953). His major themes of family life portray ordinary people in ordinary situations struggling to adapt to the changes of post-war Japan. Ozu's films such as Early Spring, The End Of Summer and Early Summer are both mysterious and poignant. Ozu (1903-1963) was born in Tokyo but moved to his father's home town of Matsusaka aged 10 and lived in the town until 1923 when he returned to Tokyo to begin work as a cameraman at the Shochiku Film Company.

Transportation
Matsusaka does have public transit system and abundant taxis, but you can walk all over this city of about 165,000 by foot without breaking any marathon records.