TORONTO — Painter, poet, designer and feminist are only a few of the words that describe the multifaceted early 20th-century artist Florine Stettheimer (1871-1944). A singular figure in modern art in the United States, Stettheimer is critically revered but remains largely unknown to a wider public. Florine Stettheimer: Painting Poetry, organized by the Art Gallery of Ontario (AGO), and the Jewish Museum, New York, will introduce Stettheimer’s extraordinary work to Canadian audiences for the first time when it opens in Toronto on Oct. 21, 2017. 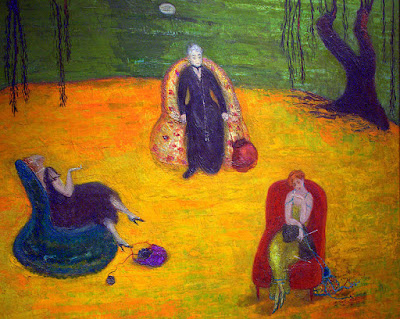 Showcasing over 50 paintings and drawings, in addition to ballet and opera costume and set designs, the exhibition offers a timely reconsideration of this important artist, placing her centrally in the modern dialogue between high and mass culture. Her paintings challenged New York’s artistic elite, fueled the vanguard of her time, and continue to influence contemporary artists working today.

“This exhibition reveals Florine Stettheimer as an uncompromising artist whose unique perspective broadens our understanding of what it means to be modern in the early decades of the last century,” says Georgiana Uhlyarik. “With her inventive compositions and daring use of materials, she defied conventions and insisted on her very own, singularly articulated artistic vision, complete with personal references, affirming Stettheimer as one of the boldest and most imaginative artists of her time.” Stephen Brown adds, “The time is ripe for a reappraisal of Stettheimer’s artistic achievement and her distinctive role in modern art.”

Stettheimer was born in Rochester, New York, and studied at the Art Students League in Manhattan and then in Europe, where she encountered two profound influences: the Symbolist painters and poets, and, on the eve of World War I, the Ballets Russes. Returning to New York in 1914, she began hosting an exclusive salon with her sisters Carrie and Ettie and their mother Rosetta, attracting a who’s-who of modern artists including Marcel Duchamp, Alfred Stieglitz, Carl Van Vechten, Georgia O’Keeffe, Francis Picabia and many others.

Stettheimer was a sharp observer of New York life, capturing its frivolity and infectious energy in her vibrant canvases. She painted family portraits and events, her circle’s gatherings, and the urban and social landscape of Manhattan, in an astonishing series of works that mingle figures, fragmentary scenes, text, and passages of high-key color in shadowless tableaus. The exhibition features a number of striking self-portraits, including A Model, c. 1915, thought to be one of the first full-length nude self-portraits by a woman artist. Although Stettheimer's works appear at first playful and full of wonder, her body of work—which covers four decades—reveals a dedicated and exceptional artist who astutely commented on the rapidly transforming American culture.

During her lifetime many critics praised Stettheimer and she was included in important group exhibitions in the United States and Europe. Stettheimer turned down every opportunity for public solo shows after 1916, chosing to premiere her paintings with the Society of Independent Artists or at her salon. Marcel Duchamp organized her posthumous retrospective at the Museum of Modern Art in 1946, after which her sister Ettie began to place Stettheimer’s paintings in major public collections across the United States. Stettheimer’s first biography was published in 1963; and since then she has developed a following among artists, including Andy Warhol who called her “his favourite artist.” When Florine Stettheimer: Painting Poetry opens at the Jewish Museum in May 2017, it will mark the first major exhibition of her work in New York in more than 20 years.

The exhibition is accompanied by a 168-page catalogue by Stephen Brown and Georgiana Uhlyarik. The book, published by The Jewish Museum, Art Gallery of Ontario, and Yale University Press, arrives at shopAGO in fall 2017.

Florine Stettheimer: Painting Poetry is included in the price of general admission and is free to AGO members. More information on the benefits of AGO membership can be found at www.ago.net/general-membership.

ABOUT THE AGO
With a collection of more than 90,000 works of art, the Art Gallery of Ontario is among the most distinguished art museums in North America. From the vast body of Group of Seven and signature Canadian works to the African art gallery, from the cutting-edge contemporary art to Peter Paul Rubens’s masterpiece The Massacre of The Innocents, the AGO offers an incredible art experience with each visit. Visit ago.net to learn more.